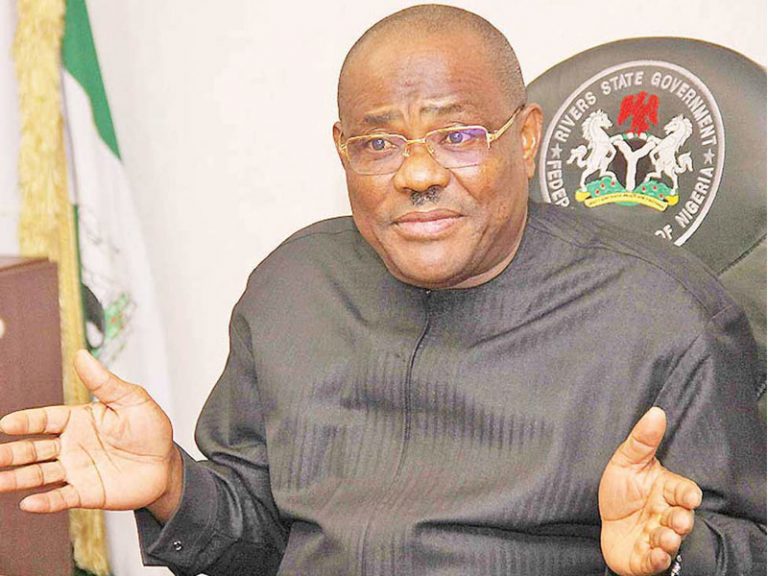 The Governor of Rivers State, Nyesom Wike, has asked for the redeployment of a Divisional Police Officer for allegedly operating an illegal refinery in the state.

The governor had on Friday held a security meeting at the Government House, having in attendance the likes of the council chairmen and heads of the Nigerian Army, Nigerian Air force, Nigerian Navy, Nigerian Police, the Directorate of State Service and the Nigeria Security and Civil Defence Corps.

www.tracknews.ng understands that the governor during the meeting issued a 48-hour ultimatum to the 23 local government chairmen to list out all illegal refineries and their operators within their jurisdiction.

There have been an outcry by citizens over soot emission threatening their wellbeing recently.

Lamenting bitterly of the development, Wike challenged the council chairmen to prove they were not complicit in the noxious business that had become a threat to the health of Rivers people and the national economy.

He warned that his government would not fold its hands and do nothing to safeguard residents of the state from the death forced upon them by criminally-minded operators of artisanal refineries.

Speaking on behalf of the governor in Port Harcourt earlier, Special Assistant to the Governor on Media, Kelvin Ebiri, said: “Now, every council chairman must go and identify where illegal refineries are taking place. If you identify one, you get N2m. So, go and identify as many as you can.

“I will pay N2m for each one. And I am going to fight against this. Our people are dying and we owe our people the responsibility to protect them, to save them from death they never caused.”

“So, you must, and you’re given 48 hours to go and identify all illegal refineries sites, and those who are in charge of them,” Wike stated.

While stressing that it will be unfortunate that he allow a police officer to own an illegal oil firm under his watch, Governor Wike emphasized that any of the council chairmen who was afraid to join in the fight against the criminals operating the illegal refineries should be ready to resign.

The governor frowned on security agencies for the role some of their personnel had played in aiding and providing cover for the operators of the illegal refineries in the state.

Wike prayed the State Police Commissioner, Eboka Friday, to redeploy out of the state a particular DPO in Emohua Local Government Area operating an illegal refinery in the area.

He said: “It’s unfortunate for this country how security people will be involved in illegal bunkering. I can’t believe it. Mr. CP, I thank you for transferring the DPO to Rumuji, who owns a refinery. But the man must leave here, not transferred. He must leave this state.

“I can’t be governor here and security man owns an illegal refinery. No, it is not possible…the man has to go. Take him to wherever they allow bunkering,” Wuke stated.

Governor Wike directed the CP to immediately arrest Chief W. J. Wocha, Fubara Ohaka, and chief Promise Ezekwe, who has been fingered for operating illegal refineries deep inside the forest of the Ibaa community in Emohua Local Government Area.

The governor further urged the Commandant of the Nigeria Security and Civil Defence Corps, Rivers State command, to immediately transfer its personnel in charge of vandalization of pipelines in the State.

“Transfer the man, and tell him to leave. He is a complete saboteur. I mean, how can security men be the ones involved in this. What kind of country are we?”

Orji Uzor Kalu Reveals How He Became A Billionaire