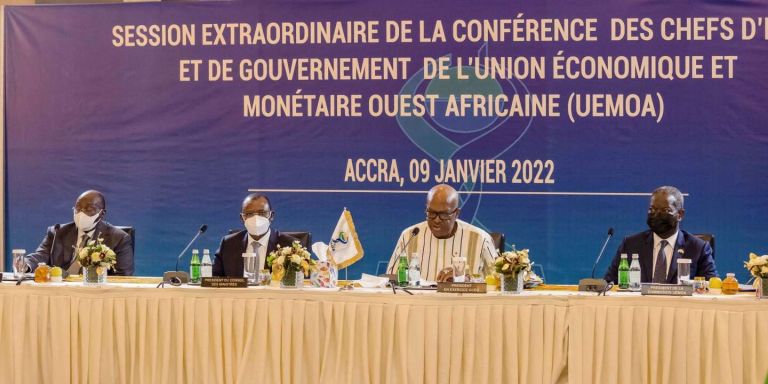 The Economic Community of West African States (ECOWAS) has imposed extra sanctions on its member Mali after the military government demanded a longer transition period following a coup last May.

This was made known in a communique issued after an extraordinary summit of West African leaders in Accra, Ghana.

According to the communique, the new measures include the withdrawal of all ECOWAS ambassadors in Mali, the closure of land and air borders between ECOWAS countries and Mali and the suspension of all commercial and financial transactions between ECOWAS member states and Mali, with the exception of the following products: essential consumer goods, pharmaceutical products, medical supplies and equipment, including materials for the control of COVID-19, and petroleum products and electricity.

The bloc plans to lift the sanctions gradually when Malian authorities will realize a timetable “finalized and on monitored satisfactory progress.”

Beyond these sanctions, West African leaders have decided to create a Standby Force to be ready for any eventuality.

President of the Malian transition and head of the junta that took power, Assimi Goita was expected to organize elections in February 2022 as opposed to 2026, the year in which he plans to hold the next presidential election.

ECOWAS considers this timetable “totally unacceptable” and condemned the obvious lack of political will from the transitional authorities, which has led to the absence of any tangible progress in the preparation of elections.

The leaders of the transition condemned the sanctions, which they consider illegal and illegitimate according to a statement signed by he government spokesman, Col. Abdoulaye Maiga.

He said the Malian authorities reject the closure of land and air borders between Mali and ECOWAS as well as the suspension of trade transactions and the freezing of Malian state assets.

He also said that retaliatory measures would be announced in the coming hours while recalling the country’s ambassadors accredited in ECOWAS member states on the basis of reciprocity.

Related Topics:ECOWAS Imposes Extra Economic Sanctions on Mali
Up Next