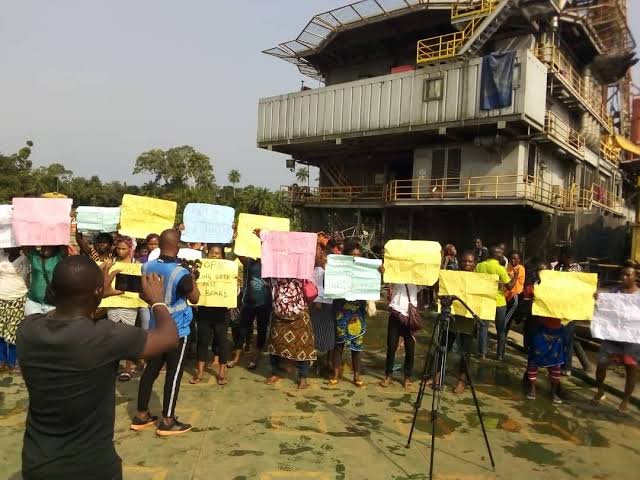 In the early hours of today 10th of Jan 2022, there was palpable tension in the oil-rich Egbemo-Angalabiri/Agbidiama communities as youths, women numbering over 1000 on a peaceful protest shut down Shell Petroleum Development Company (SPDC) Rig in the community.

Speedboats conveying the community indigenes with various placards with inscriptions “Shell stop dealing with Kenneth Oboku” “Stop giving our wealth to strangers” “Stop dealing with expired GMOU board & constitute a new one now” amongst others stormed the facility and shut it down. 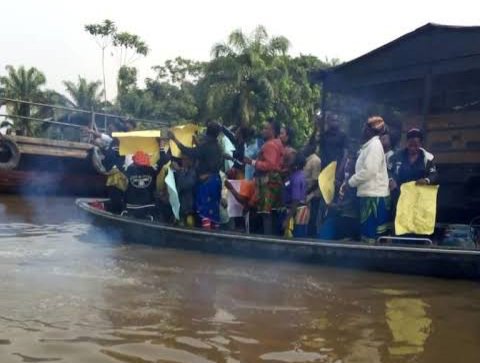 www.tracknews.ng learnt that the protesters lead by a notable businessman from the community, Comr. Benikama Ebimotimi Alex decried the divide & rule tactics of Dr. Jude Ebibokefie’s GMOU Board whose tenure has since expired over a year ago.

Benikama Alex stated that community indigenes are shortchanged and not carried along with regards to the GMOU agreement.

According to him, “We are here for a total shut down of Shell Rig until our demands are meant. We cannot be living in abject and debilitating poverty in the midst of plenty while few individuals who are not members of Egbemo-Angalabiri community cart away all jobs, contracts, thereby depriving us of development” he said.

“We are not leaving this Rig until our issues are addressed. Nothing is happening here today. We are not fighting the government or anyone. All we want is for Shell to show us the GMOU they signed with our fathers thereafter we sit down and dialogue.”

“We cannot continue to sit down while our commonwealth is being plundered by total strangers,” Benikama said

Also speaking with Journalists, a woman leader from the Agbidiama community, Mrs. Ebikaboere Peresomene said the high rate of unemployment, poverty, joblessness and other social vices in the community is becoming unbearable. She decried the high-level corruption & evil conspiracy of Dr. Jude Ebibokefie and Kenneth Oboku.

Attempts by Journalists to speak with Shell Management were unsuccessful as top staff at the Rig refused to speak to pressmen.

As at the time of filing this report, www.tracknews.ng learnt that the Rig was fully occupied by the protesting community members who vow to resist any attempt to disperse them with their blood until their grievances are looked into and resolved amicably.

Related Topics:Egbemo-Angalabiri/Agbidiama Communities Stage Peaceful ProtestShut Down Shell Rig In Bayelsa
Up Next