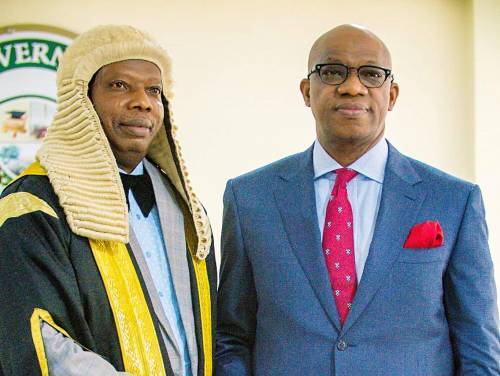 www.tracknews.ng had reported that the Speaker was being investigated by the anti-graft agency with the Assembly clerk and some former members of the House.

The EFCC had earlier in a letter dated December 9, 2021, with a reference No: CR:3000/EFCC/LS/CMU/OG1/VOL.3/165, asked Oluomo to report to its Lagos office but the Speaker had claimed he was working “on the 2022 budget presented by Governor Dapo Abiodun.”

However, in another letter dated January 05, 2022 with a reference No: CR:3000/EFCC/LS/CMU/OG1/VOL.1/004, and obtained by SaharaReporters, the EFCC asked the Speaker report to its office along with the Accountant and Director of Finance and Account for questioning. 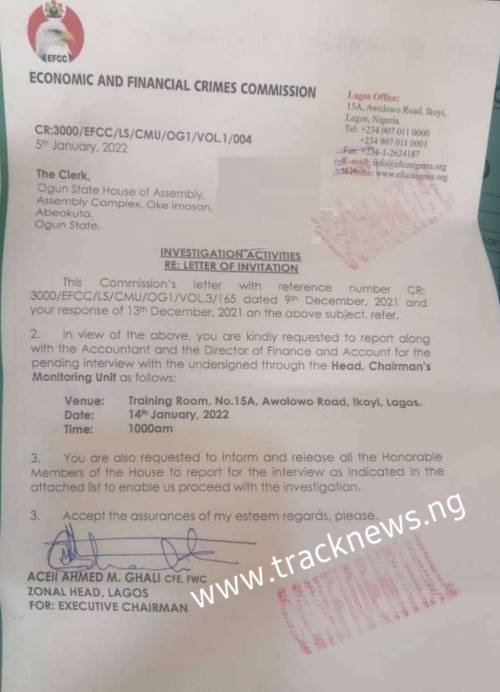 The letter read, “The commission’s letter with reference number CR, 3000/EFCC/LS/CMU/OG1/VOL.3/165 dated 9th December 2021 and your response of 13th December 2021 on the above subject, refer.
“In view of the above, you are kindly requested to report along with the accountant and Director of Finance and Account for the pending interview with the undersigned through the Head, Chairman’s monitoring Unit as follow.”

www.tracknews.ng had reported that the Speaker was being investigated by the anti-graft agency with the Assembly clerk and some former members of the House.

In another letter obtained then by www.tracknews.ng, the EFCC had asked the clerk to provide it with information on all budget appropriations and allocations of the House from May 30, 2015 till date.

“The Speaker and others are under probe for different allegations. First one is financial misappropriation. About N85,000,000 monthly for running cost of the Assembly cannot be accounted for since June 2019 till date by Mr Speaker and Clerk, the approving officer and accounting officer respectively,” a lawmaker had told www.tracknews.ng

“This led to a rift between the Speaker and the recently impeached Deputy Speaker after the latter demanded accountability and transparency. Even doing Covid-19 lockdown, running costs such as local/international travel, cost for fuelling the generator were diverted to private accounts.

“Forgery of Financial Bills (i-The House passed a resolution to approve only N75 billion Bond for the State Government sometime in June 2020, but Speaker secretly falsified the content of the resolution letter in favour of the Executive, changed it to N200 billion after members had already passed and signed resolution for just N75 billion on the floor of the House before the camera.

“Speaker falsified some contents {S.7(4)} of Ogun State Legislative Funds Management Bill, after passage, for personal/selfish grounds. After the passage on the floor of the House, he falsified the contents in his favour before sending a clean copy to the Government for assent.

“Speaker in connivance with Mr Clerk, also falsified the current Standing Order of the House before the commencement of the 9th Assembly, to favour his election as the Speaker and disqualified others to contest, amongst other contents.”