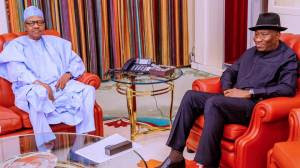 2023, it was reliably gathered, has in fact reached out to his predecessor, Goodluck Jonathan, on taking over power from him and was already working with some of his most trusted lieutenants to actualise this plan.

Against widespread belief that President Muhammadu Buhari was preparing to hand over power to a former governor of Lagos State and National Leader of the ruling All Progressives Congress, Asiwaju Bola Tinubu, and Vice President Yemi Osinbajo in May 2023 when his second term in office elapses, www.tracknews.ng has reliably gathered that the current occupier of Aso Rock Villa, Nigeria’s seat of power, was already looking in another direction.

President Buhari, it was reliably gathered, has in fact reached out to his predecessor, Goodluck Jonathan, on taking over power from him and was already working with some of his most trusted lieutenants to actualise this plan.

A trusted source around the President told www.tracknews.ng that the idea had already received the backing of some prominent politicians from the North including state governors as the arrangement will enable power to return to the region in 2027 when Jonathan would have served out his single four-year term after previously occupying same position from 2011 to 2015.

President Buhari and Jonathan had met last Thursday and according to the source, modalities of this new arrangement were discussed at length with further meetings to take place in the coming weeks to cement plans to help achieve the target.

“Pressure came from two Northern governors for President Buhari to allow Jonathan to complete his term and return power to the North for another eight years beginning from 2027,” the source revealed.

“It is for this reason that Buhari had requested Jonathan to see him last Thursday following conclusion of discussion with the two governors, one of which is Mai Mala Buni of Yobe and APC Caretaker Committee Chairman.

“This same Buni worked against Tinubu’s interest in the electoral act to ensure Buhari did not sign it.

“Tinubu had hoped to ward off challenge from Osinbajo, Rotimi Amaechi and others to get the APC presidential ticket through direct primaries.

“Buni is also working to organise national convention to create substantive national executives, all a ploy to ensure a Jonathan candidate.

“He’s masterminding a likely micro-zoning to the South-South to ensure Jonathan is the sole aspirant during the primary.

“Following the successful meeting on Thursday with Buhari, Jonathan has also moved swiftly to hold a strategic meeting with South-South ministers and will hold a national ministers’ meeting under his government afterwards as a prequel to formal declaration.

“If the plan goes well, Jonathan will choose a serving Northern governor as running mate. The most likely candidate for that will be Governor Babagana Zulum of Borno State,” the source revealed.

The latest development will surely come as a huge blow to the aspirations of Tinubu, who has been desperate to become President of Nigeria since serving two terms as governor of Lagos State from 1999 to 2007.

The APC stalwart has been romancing President Buhari since helping him to defeat Jonathan in 2015, refusing to criticise his administration’s failures in a desperate bid to have the latter hand over the reins to him during next year’s election.

However, top power brokers close to Buhari see the former Lagos governor as politically unpredictable and therefore have been working against his interest.

But to help push through his ambition, Tinubu and his men have created scores of groups to mobilise support to help make the dream a reality.

For instance, in October 2021, the South West Agenda for Asiwaju was formed in Lagos to help sell Tinubu as a viable candidate to every part of Nigeria.

Headed by a former Minister of State for Works, Dayo Adeyeye, SWAGA said emerging President of Nigeria in 2023 will be the best way to repay Tinubu for all his contributions to political development in the country.

In November 2021, another group, Patriots of Bola Ahmed Tinubu, was established in Abuja to further push the former Lagos governor’s ambition of succeeding President Buhari in office in 2023.

On January 1, 2022, Director-General, Tinubu Support Groups Mgt. Council, Abdulmumin Jibrin, said the former Lagos governor will contest the 2023 election because he had more experience to run Nigeria than the others eyeing the position.

“The issue of Bola Tinubu contesting is a done deal. He is going to contest the election; he’s going to be on the ballot paper.

“The person who has an edge over all of them, that we can hand over the ticket to and perhaps go back home and sleep, is Asiwaju Bola Tinubu,” Jibrin said.

In December 2021, Tinubu disclosed that he would consult widely before making a decision on whether to run for the Presidency or not.

“I will effectively and widely consult, particularly brainstorm with my friends and find a date to come out openly and tell Nigerians,” he had said at the time.

Like Tinubu, there are dozens of other groups also currently drumming support for Osinbajo ahead of the 2023 election.

According to one of such groups, The Progressive Project, the Vice President had all it required to effectively run Nigeria after Buhari leaves office next year.

TPP’s Director of Operations, Alhaji Usman A. Usman, said, “We made critical assessments far beyond mere partisan considerations and all rational indicators throw up the name of Vice President Yemi Osinbajo as being most qualified and most adequately prepared to undertake such assignment.”

But despite these ongoing efforts by loyalists of Tinubu and Osinbajo to market their principals, Buhari’s new stance might have thrown both men under the wheel.

Though Buhari’s new choice – Jonathan – has continued to distance himself from talks of his return to Aso Rock Villa in 2023, events of recent times strongly supports the notion of him taking over from the incumbent – an outcome that greatly benefits Buhari’s nepotistic agenda of returning power to the North in 2027.

Related Topics:EXCLUSIVE: Buhari Shuns TinubuOsinbajo To Support Ex-President Jonathan’s 2023 Election Ambition To Pave Way For North To Reclaim Power In 2027
Up Next

EXCLUSIVE: Osinbajo notifies Buhari of readiness to run for president in 2023