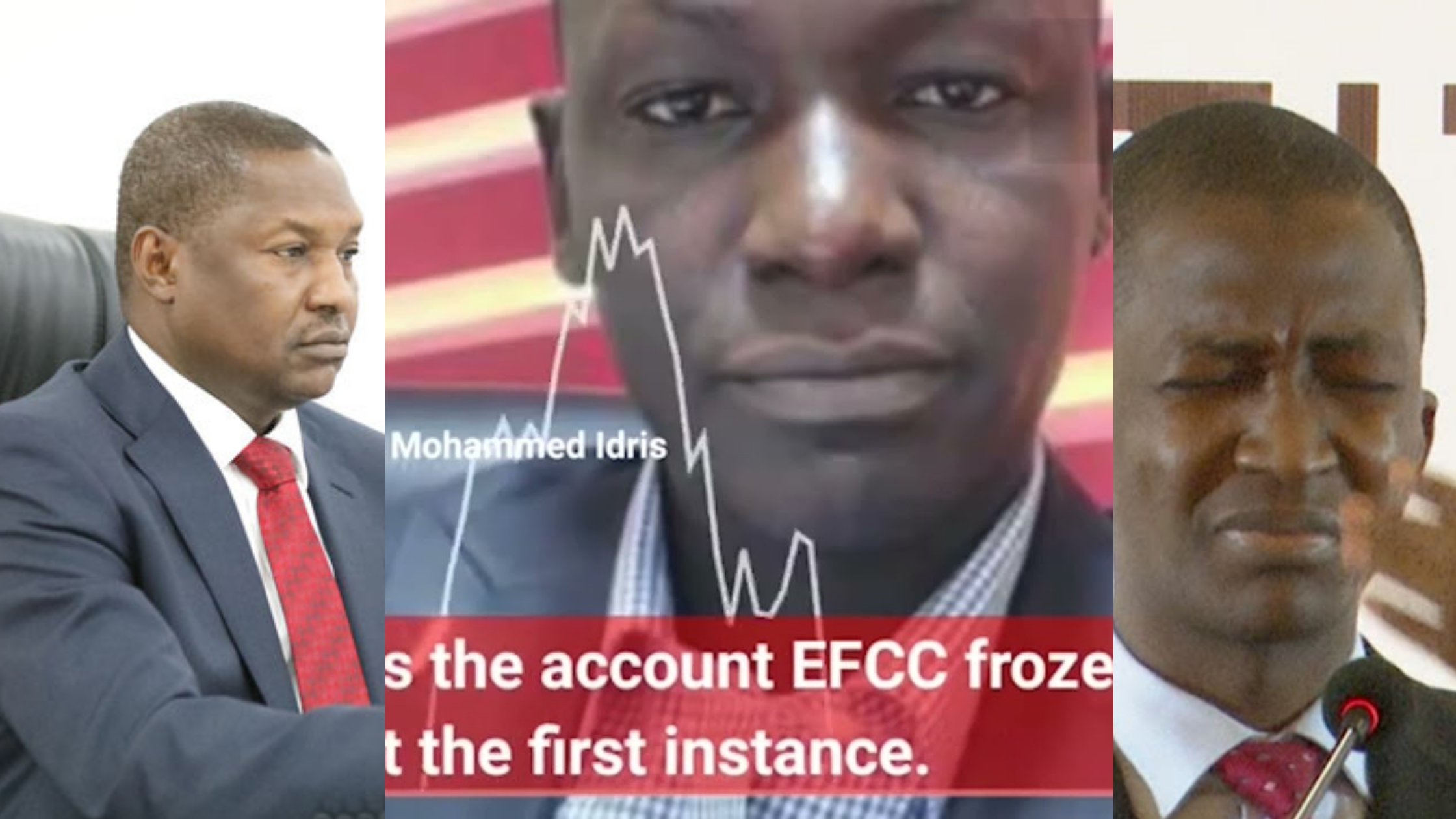 According to findings by our reporter, the EFCC operative, who is a lawyer and policeman, Mohammed Idris, was arrested and locked up shortly after a leaked conversation he had with the younger brother of a crime suspect went viral.
An operative of the Economic and Financial Crimes Commission, who exposed how Attorney-General of Federation and Minister of Justice, Abubakar Malami, uses his position and influence to order the unfreezing of ‘big cases’ bank accounts has been detained and kept at a facility of the anti-graft agency in Abuja, Nigeria’s capital.

According to findings by our reporter, the EFCC operative, who is a lawyer and policeman, Mohammed Idris, was arrested and locked up shortly after a leaked conversation he had with the younger brother of a crime suspect went viral.

Confirming Idris’ arrest and detention on Tuesday, a staff of the EFCC told our reporter that the lawyer had been held since December.

“Yes, he’s detained. He was arrested when the audio leaked to media and was published. He is being detained at the EFCC in Abuja,” the source said.

Recall that www.tracknews.ng had on December 21, 2021 reported how in the leaked audio conversation with one Abdulbari Yusuf, a younger brother to a retired Rear Admiral and former Director of Navy Accounts, Tahir Yusuf, who was facing charges of corruption, Idris accused Malami of compromising cases of corruption Nigeria.

The detained EFCC operative while giving Yusuf’s brother hints on how to defeat the anti-graft commission at the Court of Appeal as well as ways to evacuate money from a particular account, said, “If he has money in any account linked with his BVN (Bank Verification Number), he should quickly evacuate them. And if he makes transfers, EFCC will still trace it. He should only withdraw and then deposit into another account.

“Malami now controls the EFCC. The commission is in his hands. Once Malami speaks, the account will be unfrozen. They are unfreezing suspects’ accounts, including the big cases.”

The operative was speaking in reference to the frozen account of the retired naval officer’s company, Aston, by the EFCC with N114million at the formative stage of the investigations.

He also revealed how Malami introduced the suspect with a lawyer to handle the case.

“Yes, Malami introduced you to Ameh, so it will not be possible to debrief him,” the EFCC official said.

In another audio, the operative was also heard castigating his colleagues for thoroughly investigating suspects, saying they were “devilish and terrible sets of human beings”.

The ex-naval officer had made failed attempts to unfreeze the account when Ibrahim Magu was chairman of the commission.

Also, his account was recently unfrozen to enable him to quickly move out the money as advised by the EFCC operative.

It was further gathered that owing to the retired military officer’s connection with “top politicians” including Malami, his hotels in Kaduna and Zaria were recently unsealed by the EFCC.

Following the leaked audio and dust in generated, the EFCC on December 23, 2021 announced that it was investigating the issue, adding that it frowned against acts of corruption.

A statement by spokesperson for the anti-graft commission, Wilson Uwajuren, had read, “The commission wishes to state that it has commenced investigation into the content of the audio tape and will activate its internal mechanism to deal with the issues arising therefrom.

”For the avoidance of doubt, the EFCC does not condone acts of corruption. Abuse of privilege for financial gratification by personnel of the commission is a serious offence against discipline.

”Without prejudice to the outcome of the investigation, snippets of the audio recording clearly showed an abysmally compromised “officer” dropping names to ingratiate his benefactor, a relative of a crime suspect. By the alleged action, the said officer is no more than a corrupt fifth columnist with scant regard for the values of the commission.

“The action is contemptuous of the established Standard Operating Procedure of the EFCC. Such professional indiscretion has no place in the new EFCC. The commission encourages citizens who encounter any such unprofessional conduct by personnel of the EFCC to report to the commission in support of our quest to build a better agency.

“Finally, the commission wishes to assure the public that its operations are guided by established professional precepts which do not support the kind of discretion that could allow for manipulation by external actors.”