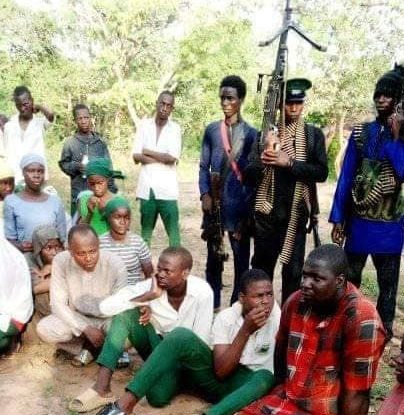 Bandit terrorists have released 30 students and a teacher of the Federal Government College, Birnin Yauri in Kebbi State.

www.tracknews.ng recall that scores of the students were abducted by the terrorists during an invasion of the school last year June and the abducted victims have since been in captivity.

Some of the students were released in October, last year, others escaped from the criminal’s hideouts while other victims were rescued by security operatives during a gun battle with the terrorists.

A statement issued by Yahaya Sarki, spokesman to Governor Abubakar Atiku Bagudu of Kebbi State, said the students and teacher were released on Saturday and have arrived in Birnin Kebbi, the state capital.

Bagudu disclosed that the released victims would undergo medical screening and other supports before they would be reunited with their families.

The governor commended security agencies in the state and those who had helped in securing the release of the students and a teacher.

He also congratulated and applauded the effort of President Muhammadu Buhari-led federal government for the release of the abducted students.

Meanwhile, President Buhari has assured that his government won’t relent until all terrorists and bandits are smoked out and dealt with.

The President gave the assurance in a statement on Saturday by his spokesperson, Garba Shehu in which he reacted to the murder of several persons during attacks by bandits in Zamfara State.

Recall that many people were killed in bandits’ attack on some Zamfara villages with many houses also set ablaze.

Some of the communities attacked by the terrorists include Kurfa Danya, Kurfa Magaji Rafin Gero, Tungar Isa, and Barayar Zaki in Bukkuyum and Anka Local Government Areas of the state.

Reacting to the attacks and killings, President Buhari assured the people that the military has been empowered to go after the criminals and won’t relent until the last of them is brought to justice and peace returned to the residents.

He said the attacks were carried out by mass murderers” who are “under relentless pressure” from the military.

Details Of Meeting Between Ikpeazu And Orji Kalu Emerges