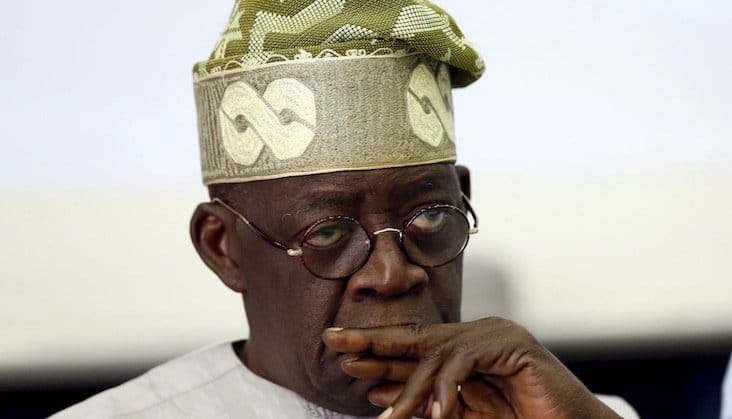 One of Nigeria’s banking institutions, Wema Bank has been accused of laundering money for the National Leader of the All Progressives Congress (APC) Bola Ahmed Tinubu and Alpha Beta Consulting Limited.

www.tracknews.ng reports that Transparency Nigeria Group (TNG) made the accusation in a statement on Tuesday signed by its Communications Directory free eew, Dahiru Mohammed.

A report on DAILY POST stated that the group asked the Central Bank of Nigeria (CBN) to sanction Wema Bank for allegedly violating the policy of the apex bank.

While calling for the probe and immediate sack of Wema Bank Chief Executive Officer, Ademola Adebise, TNG alleged that Adebise covered up massive fraud committed by Alpha Beta and other companies owned by Tinubu.

The statement reads in part: “Mr Ademola Adebise abused his office and contravened several extant regulations of the CBN.

“He helped in the covering up a massive fraudulent scheme perpetrated by companies and proxies of All Progressives Congress (APC) candidate, Ahmed Bola Tinubu”.

“Mr Adebise failed in his fiduciary duties and allowed a powerful politician to use Wema Bank as a clearinghouse for the laundered fund.”

The group recalled a report on Peoples Gazette in which former Managing Director of Alpha Beta Managing Director, Dapo Apara, made some damning allegations against Wema Bank, Tinubu and the consulting firm.

In a statement of claim filed at the Lagos State High Court, Apara described how funds were moved in apparent money laundering from Alpha Beta to businesses and individuals allegedly linked to Tinubu.

According to the statement of claim, Apara alleged that the firm has been accused of being a conduit that channels Lagos public funds into Tinubu’s political empire.

He claimed that Alpha Beta illicitly transferred N1 billion to the company that publishes The Nation, and two other printing companies namely Afkar Printing Press and Lagoon Press Limited in 2017.

Apara described Tinubu as a “controlling interest” in Alpha Beta and submitted a cornucopia of corruption allegations against Tinubu at the Economic and Financial Crimes Commission (EFCC).

Related Topics:Alpha BetaGroup Accuses Wema Bank Of Laundering Money For Tinubu
Up Next