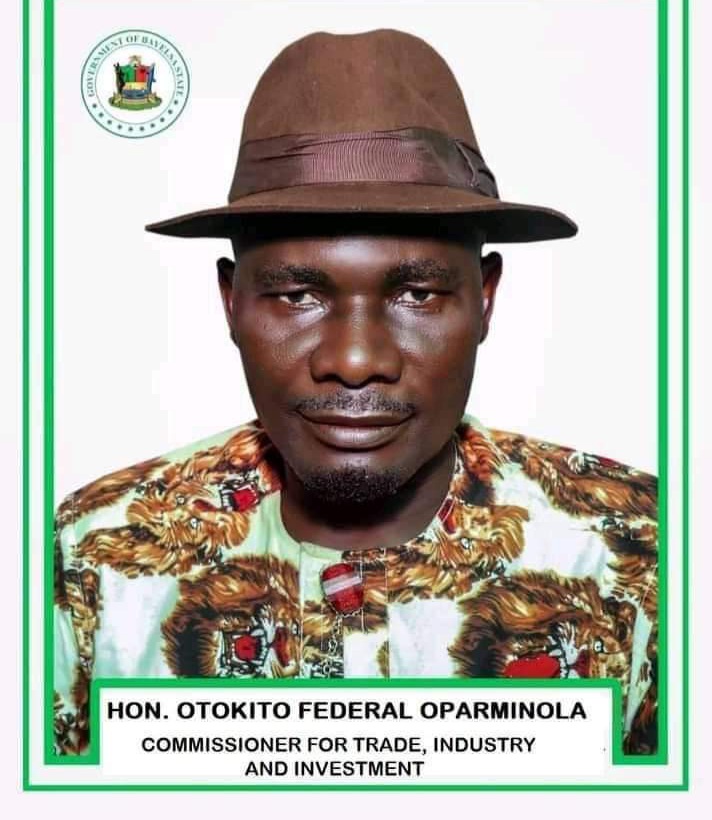 Gunmen suspected to be crude oil thieves yesterday kidnapped a Bayelsa State serving Commissioner for Trade and Investment, Mr Federal Otokito, for allegedly kicking against the plan by some suspected crude oil thieves to set up a crude oil bunkering camp near his community, Otuokpoti, in Ogbia Local Government Area of the state.

According to community sources, the leader of the gang of crude oil thieves, after being chased out of his base in Rivers State, visited the community and held a meeting with some elders, women and youths where he sold the idea of establishing a crude oil bunkering camp in the forest bothering Agbura and Otuokpoti communities.

The source further revealed that at the meeting, all parties in attendance gave their approval for the camp to be set up and at the end collected bags of rice, live goats and cash gifts the leader of the gang of crude oil thieves offered them.

Tribune Online gathered that on getting wind of the alleged meeting, the commissioner travelled to his Community and made the point clear that as a serving Commissioner in the state, he would rather die than allow such a camp to be established in his Community.

Sources further hinted that, the commissioner also went the extra mile to confront the said leader of the gang, threatening to expose them to security agents if they don’t abort their plan, and that in the process several persons verbally threatened to deal with him if he doesn’t back down.

Barely days after the confrontation, sources said the commissioner’s home was rounded up about 11 pm on Thursday by some gunmen who managed to gain entrance into his house through his kitchen, dragged him to a waiting speedboat and zoomed off.

Giving her account of what transpired, one of the daughters of the commissioner, Miss Favour Otokito, said “my father, mother, brother and sisters were sleeping when our power generating set went off. So my father asked my mother if she did not put enough petrol in the tank, she responded that she did.”

“So she went outside with the intention to bring the generator into the house, so we could find out what the fault is by daybreak. It is our village, so she didn’t envisage any danger. When she got outside, some boys come out of hiding and ran towards her, she quickly ran back inside and locked the door.

“It was at that point they started shooting at the door with the intention to force it open. They even threw stones at the window to made openings that can possibly pass through into the house. After several minutes of struggling, my father decided to escape through the kitchen door to get help. But when he got out, some of the gunmen hiding in a nearby building caught him and they dragged him to a waiting speedboat and sped off.”

Also speaking, the Community Development Committee (CDC) Chairman, Anthony Azibaloa, condemned the incident, describing it as unacceptable and provoking while appealing to the state government and relevant security agencies to act fast to rescue their son.

He said “Kidnapping is not common in our community, so we are surprised over what happened to the commissioner. So to us, the incident is totally unacceptable and condemnable. For now, we have not been contacted by the kidnappers for ransom or any form of demand for his release.

“We are appealing to the state government and relevant security agencies to swing into action and help rescue our son.

When contacted, the State Police Public Relations Officer (PPRO), Asinim Butswat, assured that Police has intensified efforts to arrest the suspects and rescue the kidnapped victim.

Explaining further, he said “gunmen suspected to be kidnappers have abducted Hon Federal Otokito at his residence in Otuokpoti, a riverine community in Ogbia Local Government Area Bayelsa State.

“Preliminary investigation reveals that the kidnappers stormed the residence of Hon Federal Otokito on 20th January 2022 at about 2300hours and whisked him away in a waiting speedboat to an unknown destination.

“The Command has launched a manhunt for the rescue of the victim and the arrest of the suspects. An investigation is ongoing.”

Related Topics:Gunmen Kidnap Commissioner Over Disagreement To Set-Up Illegal Refinery In Bayelsa
Up Next

2023: Why Benue Governor Ortom & His People Will Vote Against Tinubu

How gunmen got Bayelsa Commissioner by putting off power generator