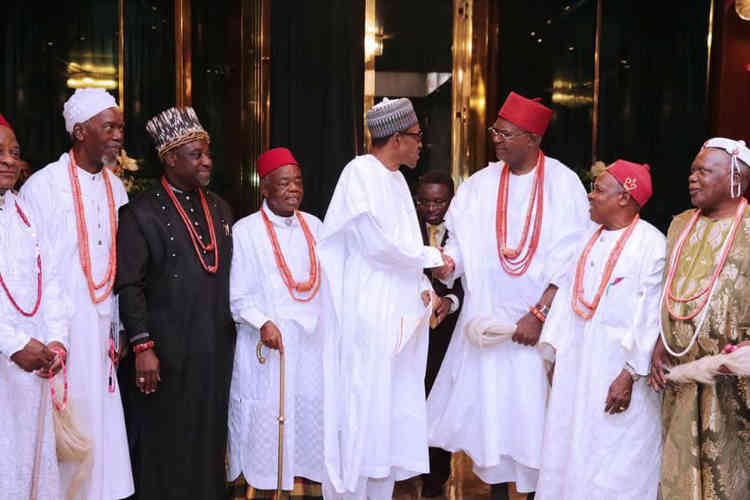 Traditional rulers and religious leaders in the South East have expressed their sadness over the pervasive insecurity in Imo State.

The monarchs and clerics made their frustration known in a statement jointly signed by the Obi of Onitsha, Igwe Nnaemeka Achebe, and Methodist Archbishop of Umuahia, Chibuzo Opoko.

According to the leaders, Imo had become a war zone and those responsible for the worsening security situation in the South-East state.

The leaders also condemned the recent invasion of a church in the state by some policemen to arrest a former governorship candidate in the state, Uche Nwosu.

They, therefore, urged all the political leaders and their followers to desist from all actions that will jeopardize the peace and unity in the state

The statement reads: “The state of affairs in Imo had led to the loss of many lives, property, toxic business environment and debilitating public culture and trust.

“The dramatic and condemnable invasion of a place of worship by officers of the Nigeria Police Force on 26th December 2021 ostensibly to effect the arrest of a former governorship candidate in Imo State has brought to the public consciousness the long-running troubling state of affairs in the state, which has led to the loss of many lives, hundreds of millions of Naira of property, a deterioration of the environment for business and a debilitating poisoning of public culture and trust.

“Even as we write this statement, a report is breaking of an exchange of gunfire between unknown gunmen and law enforcement officers, which may have left several people dead.

“We, as the clergy, traditional rulers and elders of conscience of Alaigbo, under the auspices of the Joint Body of the South East Council of Traditional Rulers and the Representatives of Igbo Archbishops and Bishops on Peace and Conflict Resolution are compelled to intervene.

“First, we urge all the political leaders in contestations and their followers to cease and desist from all actions that’ll escalate or compound the situation on the ground in the state.

“Next, we ask for an examination of conscience of the actors in Imo State, FCT, Abuja, or elsewhere. We trust that the Igbo spirit, which guided our intervention in the run up to the recent Anambra State governorship election and resulted in peaceful and salutary outcomes, will lead the key antagonists in Imo State politics to collaborate with us to help reconstruct the social order in Imo to greater civility.”

Related Topics:Insecurity In Imo Is Getting Out Of Hand – Igbo Leaders Raise Alarm
Up Next