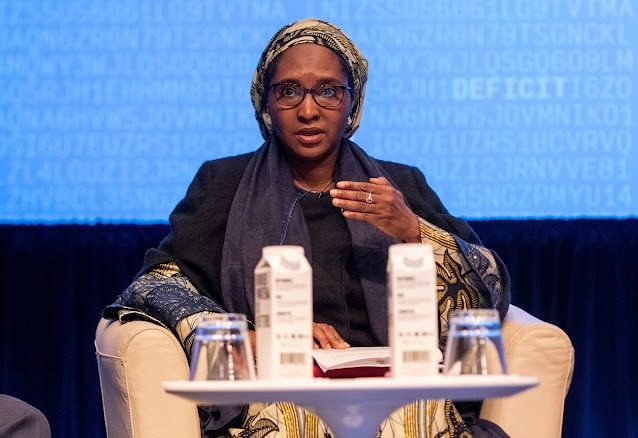 The Minister of Finance, Budget and National Planning, Zainab Ahmed, has maintained that Nigeria’s current debt level is still within the limit and is sustainable.

www.tracknews.ng reports that the minister stated this in her presentation of the 2022 approved budget.

Ahmed noted in her report that the nation’s total debt stock surge from N32.9tn as of December 2020 to N39.6tn in November last year.

The presentation as made available to newsmen on Monday, have it that the Nigerian government borrowed N6.7tn between January and November 2021.

www.tracknews.ng understands that the said borrowing in the period under review consists of N5.1tn domestic debt and N1.6tn.

The domestic debt is understood to include borrowing from the Central Bank of Nigeria. The Debt Management Office had in March 2021 disclosed that the country’s total public debt stock was N32.9tn as of December 2020.

An additional N6.7tn loan means the total public debt stock would be about N39.6tn as of November 2021. The DMO had disclosed that the country’s total public debt increased to N33.1tn at the end of the first quarter of 2021, from N32.9tn in December 2020, showing an increase of about 200bn.

Ahmed in her presentation, however, noted that there was an increase of N1.6tn from September to November 2021.

Within the 11-month period, as stated in the report, Nigeria’s debt servicing gulped N4.2tn which represents 76.2 per cent of the N5.51tn revenue generated during the period.

Ahmed, however, defended President Muhammadu Buhari‘s administration over the borrowings and the country’s debt level.

She maintained that the country had a revenue challenge, and not a debt problem, adding that the debt level was still within sustainable limits.

“This is to restate, that the debt level of the Federal Government is still within sustainable limits. Borrowings are essentially for capital expenditure and human development as specified in Section 41(1)a of the Fiscal Responsibility Act 2007,” the Punch quoted the minister as saying.

She added: “Having witnessed two economic recessions we have had to spend our way out of recession, which contributed significantly to the growth in the public debt.

“It is unlikely that our recovery from each of the two recessions would have been as fast without the sustained government expenditure funded partly by debt.”

According to the economic expert, “There are many ways through which we can improve Nigeria’s domestic revenue situation without selling the future of our country. As to the argument that Nigeria does not have a debt problem but a revenue problem, that is mere sophistry. If you’re spending 90kobo of every one naira you earn repaying debt, you are insolvent.

“You cannot say that we have a debt-to-GDP ratio that allows you to continue borrowing. No! That is an argument for sustainable economies. You cannot be comparing Nigeria with advanced economies. We are in an economy that is still very basic.

“If you are not earning enough revenue, why are you borrowing? You are just compounding your problem. Why don’t you focus on where to get the revenue from instead of lazily ignoring that problem and just trying to survive with borrowing?

“If an individual was living a life that way, it would be a calamity. That is why Nigeria is in a calamitous situation today economically,” he said.

The World Bank had recently said Nigeria’s debt was vulnerable and costly, adding that the country’s debt was at risk of becoming unsustainable in the event of macro-fiscal shocks.