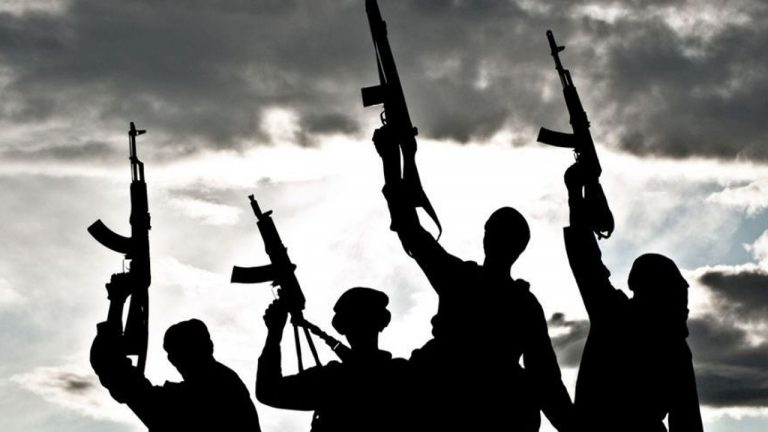 Some unknown gunmen on Monday reportedly invaded the residence of an officer of the Nigeria Police Force, ASP Aliyu Umar.

It was gathered that the assailants succeeded in killing one person while leaving another with a degree of injury during the attack which occurred at the Kofar Kona area of Zaria Local Government Area in Kaduna State.

www.tracknews.ng understands that the police personnel whose home was attacked is a member of the Inspector-General of Police Special Intelligence Response Team (IRT),

Reports made available on Daily Trust, have it that the gunmen suspected to be bandits stormed the area in their large numbers and headed straight for the home of the police officer, shooting sporadically.

Confirming the attack in a statement issued on Tuesday, the IGP’s team member, Umar said his house seemed to be the main target of the gunmen.

He revealed that the terror group had killed one Abubakar Aliyu while an elderly person identified as Abubakar was shot in the chest and had been rushed to hospital for medical attention.

Umar said, “My house was full of people numbering more than 20, including my friend who arrived from Egypt, my aged mother and my siblings. When I heard shootings, I opened my entrance door thinking it was police officers on patrol, but I saw three people holding guns and I quickly went back in and shut the door; then locked it.”

The ASP said the gunmen made holes with bullets on his house entrance while trying to gain entrance into the vicinity.

He said: “Thanks to Allah, none of my family members was affected. However, one Abubakar Sani was reportedly killed after he sustained a gunshot wound, while an elderly person, Abubakar, was shot in the chest and is being rushed to hospital for medical attention.”

Umar added that the bandits also rustled some unspecified number of cows from his Fulani neighbours just outside the Kodak Kona gate of Zaria city.

The ASP, however, assured that calmness has been restored in the area as a combined team of security agents that came to their rescue saved the situation.

BURSTED! Househelp Who Fled With Her Madam’s Son In Lagos Arrested In Ogun