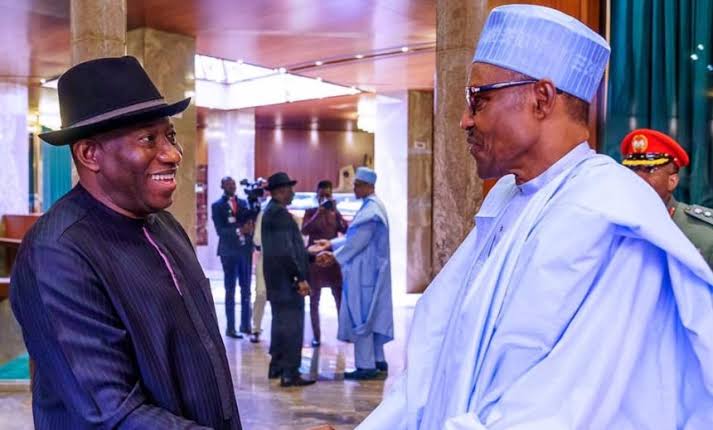 The close relationship that has existed between the immediate past President Goodluck Jonathan and incumbent President Muhammadu Buhari, has remained evergreen ever since the former left office in 2015 via an election defeat.

It would be recalled that in 2015, Muhammadu Buhari defeated Goodluck Jonathan in a keenly contested election that witnessed so much rancour and disharmony among both contestants and their supporters. This generated so much animosity that when Jonathan decided to concede defeat without a fight at the announcement of the election results, everyone including the camp of Buhari was held in awe. They all hailed the immediate past president for an usual magnanimity. That singular effort made Jonathan the toast of the African continent, world politics and even President Buhari himself. No one believed he was going to give the nation such gift of peace.

As events unfolded, Jonathan became a regular caller at the Presidential Villa as meetings after meetings with the incumbent president were held; sometimes behind closed doors, and sometimes at the full glare of the press corps. It was obvious the immediate and incumbent presidents were forming an alliance and friendship that has now proved difficult to disengage.

However, events took a different turn when between December 31, 2021, and January 4, 2022, Jonathan had paid two visits to President Buhari amid speculations that Buhari has anointed the former president to continue where he stopped as the president, if not for anything, but to complete his second term that was truncated as a token of camaraderie.

But the visits, according to observers and stakeholders, have two major reasons. While a section believe that Jonathan is reporting to President Buhari on the situations in as Mali as both are ECOWAS appointees, others are of the view that the visits are connected to the succession theory as 2023 fast approaches.

A statement issued by his media adviser, Ikechukwu Eze, noted that Jonathan’s appointment was aimed at resolving the worsening socio-political situation in Mali.

Mali has been rocked by an uprising against President Ibrahim Boubacar Keita, who had spent two out of the five years second term in office.

A resistance group, M5, is insisting that the constitutional court must be dissolved, and the president resign, before peace can return to the country.

The crisis had erupted after the court nullified results of 31 parliamentary seats in the polls held recently, awarding victory to some other contenders, which the resistance group said was at the instigation of Keita.

Riots on July 10, 2020 led to the killing of some protesters by security agents, causing the crisis to spiral out of control, hence the intervention by ECOWAS.

As a special envoy, the former President was mandated to facilitate dialogue with major stakeholders in Mali, including President Ibrahim Boubacar Keita, opposition leaders, civil society and religious organisations towards resolving the socio-political crisis in the country.

Consequently, Jonathan has remained a regular caller at the Aso Rock Villa, to brief Buhari on matters arising in the African country. He had the privilege of the presidential jet to do his shuttles as Buhari has provided.

As January kicks off, Jonathan was again at the Villa, ostensibly to brief Buhari on the situation in Mali ahead of the ECOWAS summit scheduled for Sunday in Ghana.

Eze, who made this known in an interview with newsmen, said that Jonathan’s visit to the Aso Villa was not politically connected, contrary to speculations and some media reports.

“I can confirm to you that the visit of His Excellency to the Presidential Villa was purely to provide update on the political situation in Mali.

“As the ECOWAS Mediator in Mali, Jonathan, went to the Villa to update the President on his mediation role ahead of the ECOWAS summit slated for Sunday, in Ghana.

“Jonathan just came back from Mali yesterday (Wednesday) and he has gone to brief the president ahead of the summit of the Authority of Heads of State, which he also is attending,” he said.

According to him, the ECOWAS summit is held on Sunday, in Ghana and a key item for discussion is the development in Mali.

“As you know, there has been a delay in releasing the timetable for the conduct of Mali’s election. The country had a national conference which was just concluded and they made recommendations on the time elections could hold.

“So, ECOWAS will be meeting on Sunday and that is why Jonathan visited Buhari,” Eze said.

Jonathan had on December 31 visited President Buhari at the Presidential Villa, Abuja.

The latest visit of the former president to the Villa was greeted with a closed-door meeting with the President immediately, the content and agenda of which the Presidency is yet to disclose till date. This has sparked reactions from various areas speculating that the visit is not unconnected with who will succeed Buhari on May 29, 2023.

Buhari and Jonathan’s new found alliance resulted in the president naming the railway complex in Agbor, Delta State, after his predecessor.

Jonathan had commended Buhari for naming the railway complex after him, describing the move as a “good gesture”.

The line, which was started in 1987, was built to move iron ore from the mines around Itakpe to the steelworks at Ajaokuta, Kogi state, but was abandoned for many years before construction resumed during Buhari’s first term in office. Jonathan described he completion of the project as “the way to go”.
According to him, “it shows that the president is going on with the legacy projects of previous administrations”.

“Let me use this opportunity to commend Mr President publicly. I have already sent a letter to him appreciating that it is a good gesture,” Jonathan said.

“Completing the railway programme is good. It shows that the president is going on with the legacy projects of previous administrations and that is the way to go. I appreciate it and I thank Mr President.”

Speaking with The Boss, a government source, who preferred anonymity, said that it was not on all occasions that Jonathan’s visitation to the Villa had the Mali agenda. Most of the visits had had personal undisclosed agendas, “and nothing could be more personal to the two leaders than the 2023 and succession”.

In recent times, and following Buhari’s interview with Channels Television, where he mentioned that his favourite candidate for the presidential seat remains close to his heart as a disclosure could lead to the person’s elimination, speculations had been rife of the possibility of Jonathan jumping ship from the Peoples Democratic Party (PDP), which gave him the platform to become president in 2010 to Buhari’s party, the All Progressives Party (APC). Though Jonathan had dismissed and denied such possibility, the romance he had enjoyed with the presidency and Buhari particularly, seems to speak the contrary.

Analysts have said that Buhari, working for the North, is bent on returning power to his region after four years, and Jonathan, who has served a previous four years is the right pun to actualise the dream. and hence the constant visitations and relationship.

On the other, Jonathan seemed not to have anything to lose as a person, as he would have made as the president, who made a dramatic comeback after losing an election. His place in African politics will soar higher. But the South would have been taken back donkey years in the political equilibrium of Nigeria.

Jonathan’s frequent visits to Buhari, according to analysts, may not have much to do with the Mali fiasco as the visits are dated back to 2019, prior to his appointment as ECOWAS envoy in July 2020.

It won’t be long before the real intentions are disclosed as the candidates for every party contesting the 2023 presidential election would have been known by September 2022. More so, all interested aspirants would have thrown in their hats in the ring as 2022 gradually unfolds.

Besides the supposed aspirations of former President Jonathan, there are also other notable individuals, who are believed to eye the seat of power. They include the Vice President, Prof Yemi Osinbajo, former Governor of Lagos State, Asiwaju Bola Tinubu and former Secretary to the Federal Government, Anyim Pius Anyim.