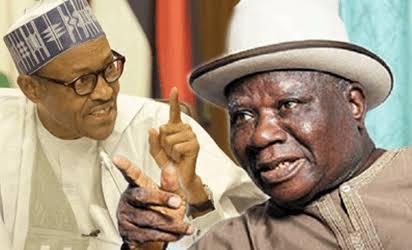 Prominent Ijaw leader, Chief Edwin Clark has called on President Muhammadu Buhari not to deny Nigerians the opportunity of having a state police system.

Clark in a statement on Monday disagreed with the President’s dismissal of the calls for the establishment of state police over fears that it will be abused by the State Governors, stating that the federal government also uses the police as it is currently structured to harass perceived enemies.

In his view, the President promised Nigerians restructuring during his campaigns, and going back on it now will show Buhari as an “insincere and dishonest” person.

Though the Ijaw leader pointed out that he agrees with Buhari that the state governors have killed the local government, it is not enough reason to deny Nigerians the opportunity of state police which a majority of the people have been clamouring for.

www.tracknews.ng reports Clark made his mind known as a reaction to the recent declaration by President Buhari that he won’t approve state police as it can’t solve the security challenges facing the country.

But Clark argued that despite the President’s fears, absolutely ruling out the idea of state police based on the fear that the Governors will mishandle it, is like throwing out the bathwater with the baby.

“While the president is right that no local government in this country truly functions as provided by the constitution, not even the joint account under which state governments receive monies on behalf of the local governments, because the accounts are fully controlled by the state governors, it is not enough to dismiss the demand for state police.

“Like I stated in my recent interview, state police is a popular agitation by Nigerians and was robustly discussed and agreed upon during the 2014 national conference.

“It is very unfortunate that the state governors who are elected under the party are the ones running the party today. But it is unconstitutional for Mr. President to say that state police, which was even recommended by the El-Rufai committee — as one of its items under devolution of power to be transferred from the executive list in schedule 1 of the 1999 constitution, as amended, to schedule II of the concurrent list — should be discarded.

“I totally agree with Mr. President that most state governors have undermined the provisions of the 1999 constitution, where local government is provided for under Section 8. They do not only abuse the joint account system but also engage in establishing caretaker committees, rather than conducting free, fair and democratic elections.

“I also agree with Mr. President that state police could be used by state governors in persecuting perceived political opponents, but it is also true that the federal government is also using the Nigeria Police Force to persecute perceived political opponents, undermining the NASS and obstructing free speeches. But that does not mean that the whole idea of state police should be discarded? That will mean throwing away the baby with the bathwater.”

Related Topics:You Can’t Deny Nigerians State Police Because Of Your Own Fears – Edwin Clark Tackles Buhari
Up Next

Nigeria To Conduct Digital Census In May 2022 – NPC