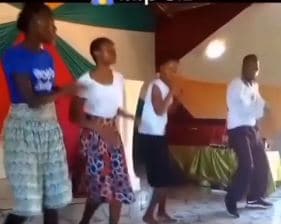 A young lady has reportedly died during a dance choreography in the church.

In the now-viral video, the lady who is yet-to-be identified was pictured dancing with a group of other dancers before slumping and later dying.

Although, it cannot be ascertained at the filing of this report what led to her death.

Meanwhile, two female students of the Plateau State Polytechnic, Barkin Ladi Campus, have been kidnapped by some gunmen.

www.tracknews.ng gathered that the students were abducted and whisked to an unknown destination during an invasion of a hostel known as ‘Plateau Embassy’ on Thursday.

Confirming the incident, the spokesman of the state Police Command, ASP Gabriel Ubah, said the students were actually kidnapped in Ban Village and one suspect has been arrested.

Related Topics:Dies While Performing Choreography In ChurchYoung Lady Slumps
Up Next