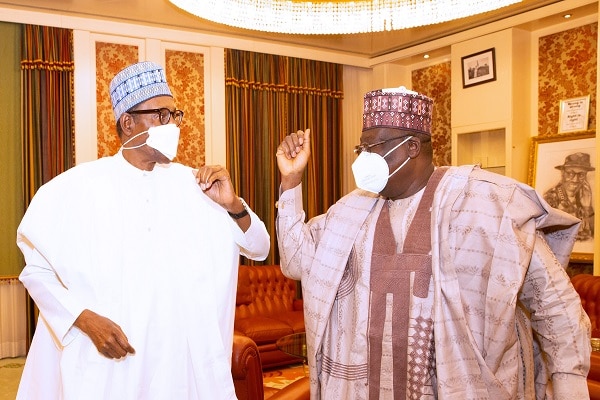 Senate President Ahmad Lawan has expressed confidence that Nigerians would vote massively for the All Progressives Congress (APC) during the 2023 general elections.

He said the optimism is based on his assessment of what the APC and the leadership of President Muhammadu Buhari has done for the country since assuming power in 2015.

TrackNews reports Lawan made his view known while speaking on Thursday after a meeting of the National Assembly leadership with President Buhari ahead of the APC National Convention on Saturday.

He said though there have been lots of challenges on the way, the current administration has been able to face them squarely and deal with them.

He added that the APC is united unlike other parties in the country because it has a father figure whom every member listens to in the person of President Buhari.

This, Senator Lawan hinted is why the party remains united and is able to settle every disagreement based on party supremacy.

He revealed that the APC is not just working and planning for its national convention but also the 2023 electioneering campaigns and the election itself.

In his words, “I want to say that this meeting with Mr President has given us more energy. We believe that there is a father, at least in our party; there is a president who will ensure that once there are disagreements he is able to call everybody to order and ensure that the family continues to remain united and that is what we have been able to achieve over the years.

“And I want to add here, finally, to say that we are committed to ensuring that this political party does not only have a successful convention but a very successful, peaceful, and safe electioneering campaign during 2022/2023 general campaigns and the general elections, by the grace of God.

“We’ll see Nigerians voting once again for APC because we have so far done so much in the areas that matter for the people of this country. But that is not to say that we are not facing some challenges we are, but we are squaring up to ensure that we deal with those challenges.”

On the APC national convention scheduled for Saturday, the Senate President said a ‘unity list’ which would contain consensus candidates for various positions is expected on Friday, March 25.

“We hope to achieve a consensus in selecting and electing the officers for the party, we are prepared to come up with a unity list,” he stated.

Related Topics:2023: Nigerians Will Vote For APC Again Because Of What Buhari Has Done – Lawan
Up Next