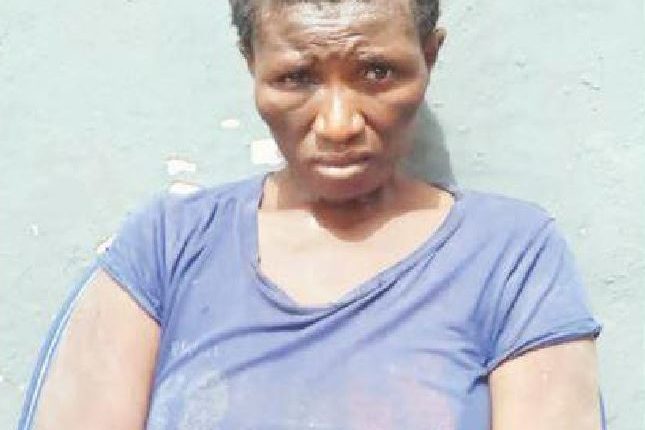 A woman in Umuchigbo, Iji Nike community, Enugu East Local Government Area has revealed how she pretended to be mad in order to abduct innocent school children.

The woman, who identified herself as Chinwe Okafor, claimed she hails from Iyi village in Ozubulu in Anambra State. She was caught penultimate Thursday trying to abduct children for sale from Umuchigbo community near Enugu.

Some residents of the community said they had had always suspected that the woman was not genuinely mad and that she could be on a satanic mission in the community.

Her mode of operation was to pretend to be insane and blow a powdered charm to the face of her victims to enable her to carry them without being suspected.

Chinwe allegedly confessed to have successfully abducted two male children in the community and had reportedly handed them over to her brother, Chibuzor Okafor, who sold each of them for N400,000.

Speaking after she was intercepted, the woman claimed to have been living in an uncompleted building in Umuchigbo community for more than a month, from where she has been monitoring the neighbourhood.

She said: “I changed station from the North. I was living in Sabon-Garri in Kano State with my brother before I came to this place.

“I have only sold two children. I caught them with a charm made with white powder. When I blow the substance on their face, they become weak and sleepy.

“It was Chibuzor that gave me the white powder. He comes here to meet with me. He was the one that told me to come to this community. “I am not mad. I just want to dress like this to enable me to operate without being noticed. My other clothes are in my bag. I left my hair like this because I want it to grow so I can plait it.”

It was learnt that it took the intervention of the leadership of the community to save the suspect from being set ablaze by an angry mob in the village.

There have been several unresolved cases of missing children and young girls in Umuchigbo, a suburb of Enugu metropolis; a development that has given the leadership of the community grave concern.

President General of Iji Nike community, Chukwuemeka Anike, lamented that “some of the missing young girls were later found dead with their vital organs missing. The children were never found.

“This lady came to abduct a child yesterday (Wednesday) and she was caught in the act by security men. The boy was going into his parents’ compound after running errands for them when this lady grabbed him.

“The boy started shouting and attracted the attention of the security men. If she had succeeded in applying that charm, the boy would have slept off and that would have been his end.

“This lady is someone we don’t know. For more than two months she has been living in an uncompleted building, looking for children to kidnap.

“Last year, a woman went to have her bath. Before she could come back, they had stolen her four-day-old baby.”

Related Topics:I disguise as mad person to abduct children – Woman confesses
Up Next