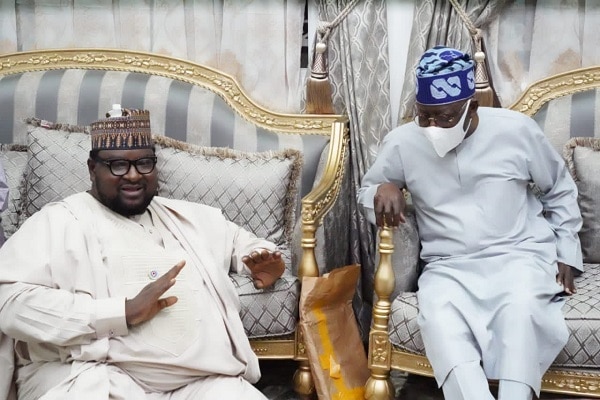 A Kebbi-born multinational contractor and Director-General Tinubu Support Organisation, Aminu Suleiman, on Wednesday signed a cheque to purchase the presidential nomination form for the National Leader of the All Progressives Congress, Bola Tinubu.

This is coming barely 24 hours after the ruling party announced the sale of its presidential nominations forms for ₦100million.

Suleiman reiterated his belief in the capacity of the former governor of Lagos State to positively transform Nigeria as President.

“Speaking this evening, Hon. Aminu Suleiman Director-General of the real Tinubu Support Organisation said ‘Asiwaju has helped, raised and lifted a lot of people and he is a man with a kind heart.

“The only thing I can do right now is to buy the ₦100m APC Presidential Expression of Interest Form and Nomination Form for his father and mentor.

“Asiwaju Bola Ahmed Tinubu is the man of every moment and he will transform Nigeria when he becomes the President. There will be economic growth and prosperity and Nigeria will be an r place.”

The National Coordinator, Nigeria Next Level Forum, Oladipupo Oladosu while speaking on the development noted that it is not only true but a confirmation of the firm belief in the capacity of Tinubu to transform the country.

He further stated that his group has aimed to ensure that a Yoruba man emerges as the next President of Nigeria.

According to Oladosu, Tinubu has proved his worth through his network and human capacity development among other aspirants.

Oladosu, who doubles as the founder and the National Coordinator of Yoruba Patriots Movement (YPM) since 2015, said, “Aminu Suleiman is the Next Level Forum Coordinator for the North West. He is a very wealthy businessman, a big-time contractor, multinational businessman and he has the means.

“When he told me he would do it, I told him he should go ahead, so it’s true.

“I told people that he has three advantages over us. in the first instance, he is not from our ethnic nationality, he is a Fulani from Kebbi.

“Secondly, he is a very bold man. He is a Lion. And when he is doing his thing, he never looks back. He has that distinctive character like Asiwaju Bola Ahmed Tinubu.”