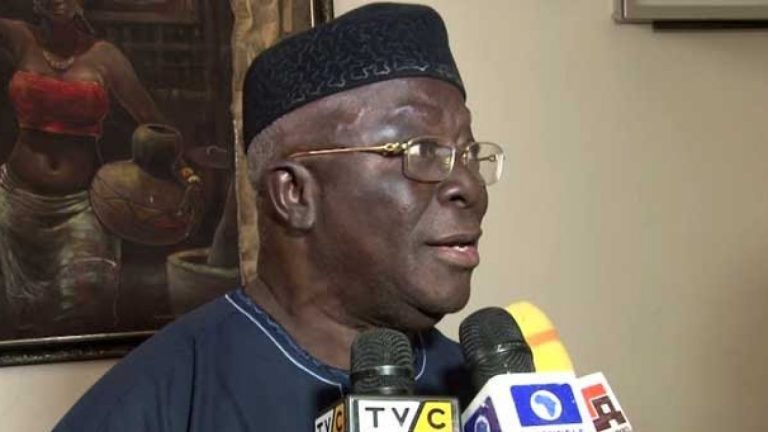 Leader of the Yoruba socio-political group, Afenifere, Chief Ayo Adebanjo has revealed that he is not in support of any candidate from the southwest to emerge as Nigeria’s president in 2023.

This is as he called on both Vice President Yemi Osinbajo and former Lagos State Governor, Asiwaju Bola Tinubu to drop their 2023 presidential ambitions.

According to Pa Adebanjo, in the spirit of fairness and equity, the 2023 presidency should go to the southeast as other sub-regions in the south have had their stints at both the presidency and vice presidency since Nigeria returned to democracy in 1999.

He however added that even before anyone can be talking about who will become the next President of Nigeria, everybody must come together to tackle the insecurity in the country.

He pointed out that it is when there is peace that Nigerians can talk about elections and politics.

The Afenifere leader made his submissions in an interview with The Punch on Tuesday.

He said: “Right now, is there a country for them to be President? There must be one country first before you can talk of an election. Is this the country Jonathan handed over to Buhari? Whether a Southern or a Northern candidate, let us unite everyone. We can’t get everyone united until we change this constitution.

“Are you safe? Talk about security. How am I sure that I won’t be shocked when I go to the police station, when electoral officers, soldiers, and policemen are being shot dead and I can’t travel to Maiduguri safely?

“All those who are clamouring for Presidency, be it Jagaban (Tinubu) or Osinbajo, they should assure us of our safety first, that the country is safe, that we are one, then we talk of who is going to be President. They should forget about their ambitions now until there is safety. Nobody can go to the South-East now, and we are all living in denial.”

On why he believes it is the turn of the southeast to produce Nigeria’s next president after the tenure of President Muhammadu Buhari, the Afenifere leader said Chief Olusegun Obasanjo was president for eight years, Professor Yemi Osinbajo has been the Vice President position for about eight years- both from the southwest.

He then added that Goodluck Jonathan from the southsouth was President for five years and before then, the Vice President.

Hence in the spirit of fairness, the southeast deserves it.

In the words of the Afenifere leader, “How can I back a South-West candidate? That is not equity. Has Obasanjo not done so for eight years? Has Osinbajo not done eight years as VP? Has Jonathan not done five years as President? Is the South-East not part of Nigeria?

When contacted for a reaction to the opinion of Pa Adebanjo, the camps of both Tinubu and Osinbajo disagreed with him but said he is entitled to his personal opinion which is not binding on their principals.

Related Topics:2023: Let The Southeast Have It – Afenifere LeaderOsinbajo To Drop Presidential AmbitionsPa Adebanjo Tells Tinubu
Up Next