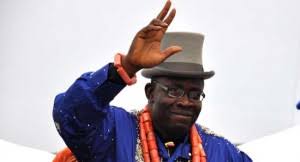 Opposition to the second term bid of former governor of Bayelsa State, Senator Henry Seriake Dickson to emerge the flag bearer of the Peoples Democratic Party (PDP) for the Bayelsa West Senatorial election has collapsed.

For some weeks there has been severe political hullabaloo from Bayelsa West with political leaders from Sagbama and Ekeremor Local Government Areas polarised over the rotation of National Assembly seats between the two local governments.

The polarisation had extended to the Bayelsa State House of Assembly and the State Executive Council thereby threatening the unity of the party in the state.

According to investigations, the opposition against Dickson was being spearheaded by the member representing Sagbama/ Ekeremor Federal Constituency, Hon Fredrick Agbedi who was banking on Governor Diri to use his fiat to stop Dickson from getting a second term.

However, just as he mediated through a stakeholders meeting to resolve issues concerning Bayelsa Central and Bayelsa East, Diri at a meeting with political leaders from Bayelsa West impressed on them why it is imperative for Dickson to return to the Senate.

According to sources at the meeting, Diri argued in favour of Dickson’s second term bid noting that the state should rally support for him.

Governor Diri was quoted as pleading with the people of Sagbama/Ekeremor to rally support for Dickson’s second term at the National Assembly.

“Governor Diri called on all stakeholders from Bayelsa West Senatorial district to allow the status quo of former governor Dickson for Senate but was silent on the next move for Hon. Fred Agbedi (Ekeremor). He reminded them of the contributions of former governor Dickson to the party and the State. And particularly the role he played during the last election where PDP miraculously emerged as winner,” he said.

The source stated that Agbedi has been told to take advantage of the extension of sale of forms by the PDP to go and purchase the House of Representatives form.

However, the spokesman of the Ijaw Youth Council, Mr Ebilade Ekerefe said the reasons advanced by Diri calling for support for Dickson are valid.

“Let me especially plead with the few that may be angry that loyalty to party leadership and decision is important and must be upheld. And therefore, it’s time to put the past behind and let’s move forward.”

However two House of Representatives aspirants from Sagbama , Jeremiah Owoupele and Barnabas Edure were disappointed with the outcome of the meeting; sources said the duo might forge ahead with their political aspirations and face the consensus of going against the decision of the governor.

Owuopele in a statement posted on his Feacbook page appealed to Diri to allow everybody contest in the spirit of fairness.

“I appeal strongly to our leader, the Governor, to in the spirit of fairness allow everyone to contest the elections. I want to also remind my leader who has introduced a new approach to politics, that of being absolutely sincere and putting the interest of the people as paramount to remain within these defined leadership boundaries. His people from Ayamasa are asking for justice as the people of Aleibiri are also asking him to uphold justice in this matter, the same justice which allowed them to vote massively against their son Peremobowei Ebebi.”

Related Topics:2023: Opposition against Dickson collapse as Diri backs second term
Up Next

2023: What God Told Me About Presidency Ambition – Ngige