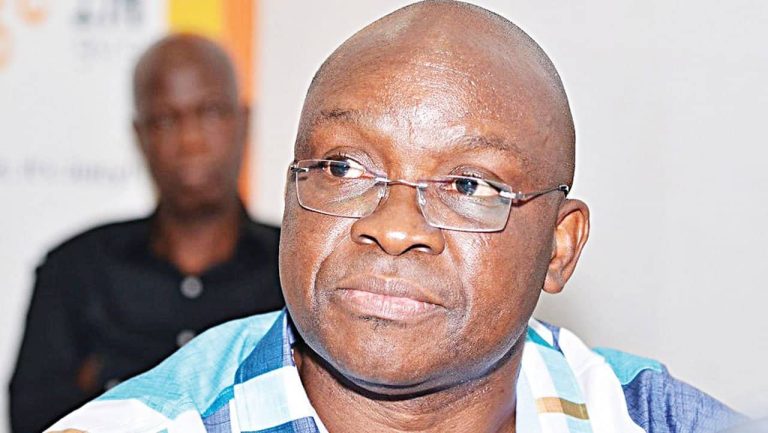 Former Ekiti State Governor, Ayodele Fayose has vowed to go all the way in contesting the 2023 presidential ticket of the Peoples Democratic Party (PDP).

Fayose argued that the only right thing for the PDP to do is to zone its presidential ticket to the south, given that the ticket was zoned to the north in 2019 and southerners respected the party’s decision to allow only northern candidates emerge at the Port Harcourt convention.

The former Governor made his stand known on Wednesday during an interview with Channels Television.

He added that there is no truth in the reports going around that the PDP would throw its 2023 presidential ticket open as he is a member of the committee that worked on zoning and at no point in time did they agree not to zone the ticket.

“I don’t believe in not zoning this presidential ticket. I was a member of the zoning committee except for the last day that I picked up my form,” he said.

“All they said was ‘because the party ought to have started the process a long time, for reasons on the fact that some people have bought forms, maybe the party can find a way to work around consensus’. They never made that statement (on throwing the presidential ticket open).

“Let me say to you, the only solution is zoning. The north can’t contest the last primary — the one we had in Port Harcourt which was an all northern affair — and come and tell us that there won’t be southern affair.”

Fayose also carpeted some members of the party advocating for a consensus candidate, saying he wonders who will step down for who in the race to the 2023 presidency.

He added that the only thing that can make him agree to a consensus candidate is if he is the chosen one.

“I saw the people going around for consensus. Who will step down for who? You asked me to step down? I won’t step down,” he said.

“They said they want all of us to come and do consensus. I don’t know about them. I have taken my form today. I am not going to step down.

“Who knows if it is me that Nigerians want to vote for? Do you know the mind of Nigerians? Do you know who they want? Any meeting or anywhere they talk about consensus, as good as that language looks, it is undemocratic.”

He added that he has all it takes to win the PDP ticket and go ahead to win the 2023 presidential election for the party, adding that Nigerians love him.

“It is Nigerians that will determine who will win the election. How did I win in Ekiti as a two-term governor, defeating two incumbents? Life starts from somewhere,” he added.

“If I do not matter, why did you bring me here? Nigerians love me. I purposely went there to get this form. I will start to go to states to let them know. I am prepared for this onslaught. I’m going to contest this election.”

Related Topics:2023 Presidency: I Won’t Step DownPDP Must Zone Ticket To The South – Fayose
Up Next