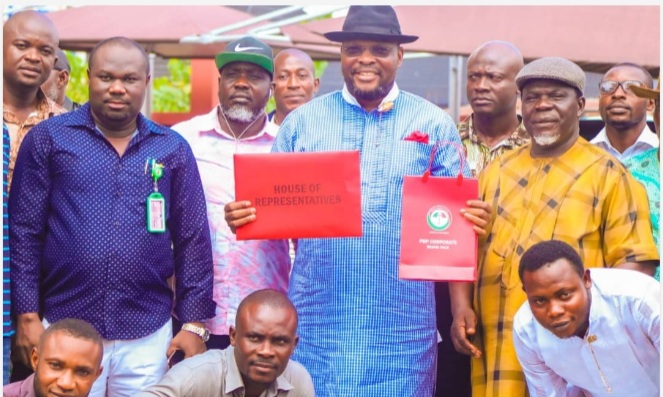 Former Bayelsa State Commissioner for Information and Orientation, Daniel Iworiso-Markson, has promised to implement his New Deal manifesto when elected into the House of Representatives for Ogbia Federal Constituency.

Iworiso-Markson also said he remained the best choice for the Peoples Democratic Party (PDP) with the general acceptance and popularity to win the forthcoming poll for the party.

He explained that the New Deal manifesto is anchored on six pillars of Bond of Unity, Education, Empowerment, Special Status for Ogbia, Oloibiri Oil Museum, a UNESCO heritage site, and Effective Communication.

Iworiso-Markson spoke on Thurday in Yenagoa when he presented his expression of interest and nomination forms to the people of Ogbia Kingdom to contest the 2023 House of Representatives election on the platform of the PDP.

He said his decision to procure the forms was another stride in his conviction to provide effective representation at the National Assembly by leveraging on his experience, network, exposure and connections.

He described his manifesto as a well thought out strategic plan that encapsulates his vision to bring about a pragmatic approach and a paradigm shift in peoples representation.

He said the manifesto formed the basis of his aspiration to the National Assembly and that he would work with PDP leaders and stakeholders to fully achieve it.

He said: “Having picked the form, I decided to bring it back home to present to our leaders and stakeholders who are pivotal to my journey to the Green Chambers. It is another very significant day in my quest to offer myself to represent Ogbia people.

“It also signifies a major step in the realization of the New Deal agenda which we have mapped out. The focus of the agenda is to make stronger the Bond of Unity in Ogbia, to provide workable partnerships that will guarantee quality

Education for our children, Empower our youths and woman in critical skills that will make them employers of labour.

“Also create a Special Status for Ogbia, as the first place where oil was discovered in commercial quantity. Make the Oloibiri Oil Museum, a UNESCO heritage site and provide like never before Effective and Efficient Communication, so that our people can have a sense of what is going on in Abuja. This is the thrust of our agenda”.

Iworiso-Markson vowed to deploy his network and support base to ensure the reelection of the state Governor, Senator Douye Diri, insisting that the governor deserved a second term.

2023: Why I withdrew from Ibadan North West/South West House of Reps race – Fagbemi