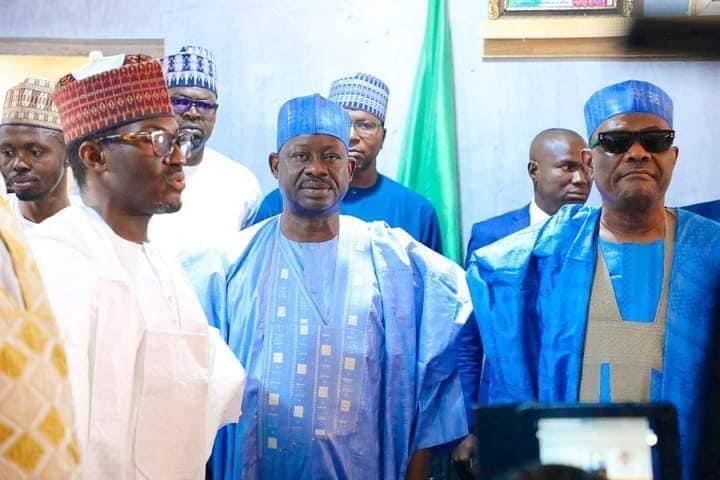 The Governor of Rivers State, Nyesom Wike on Wednesday met with the former Governor of Gombe State, Ibrahim Dankwambo and stakeholders of the Peoples Democratic Party in the state as part of his ongoing consultation ahead of the party’s presidential primary election.

Wike, while speaking during the visit, said he has the capacity and energy required to lead Nigeria as its president in 2023.

The Rivers State Governor while speaking at the party’s secretariat in Gombe, called on them not to waste their votes on presidential aspirants who cannot win the 2023 general election.

He said, “If you want PDP to win election in 2023 I have made myself available. Give me the ticket, let me go and take the power for you. We are talking about who can take this power from APC (All Progressives Congress). That person is me.”

According to Wike, Nigerians are free to visit Rivers State to see the upliftment of the socioeconomic status of the people.

He said there is need to rescue Nigeria from its current state and it required men of courage who love this country to do the work.

“So, it is not for sentiment. It is not for people to come and tell you, look, it must come from here, no, no. It is for those who have the capacity. If given the opportunity, I will replicate what I’ve done in Rivers State as President of Nigeria.”

The PDP chieftain condemned the APC led Federal Government for the lies they kept telling Nigeria concerning improving the agricultural fortune of the country.

He vowed that PDP will not lie to Nigerians, make excuses for failures, but will work to genuinely improve the life of Nigerians across the country.

Wike added, “They said they have given over N300b for agriculture. I have no problem with that. Even if they have spent N1 trillion, where is the food?

“I don’t want people going to buy rice and doing pyramid. I want to see to it that agriculture is working.”

Governor Wike noted that APC leaders have accepted that their government has failed and it sets the coast for PDP to reclaim the power and country back to Nigerians.

Wike stated that the plan by some politicians to hire mercenaries to fight bandits and terrorists overrunning the country is worrisome.

The Rivers State Governor said, “And you have a president staying there, the security chiefs are there, and somebody is saying you must bring in mercenaries. You have seen it that the government has collapsed.

Dankwambo while speaking commended Governor Wike for visiting the state to formally acquaint PDP stakeholders of his presidential ambition.

The former Governor who acknowledged Wike’s excellent performance in office, assured him of Gombe state support if he clinches the presidential ticket.

He said, “Power comes from God. God gives power to whom he wants. He takes power from whom he wants. We will contribute to PDP to takeover power. But at the appropriate time, whoever emerges the candidate will sit down with Gombe people and discuss. We will negotiate. We will not be taken for granted this time around. We will work for you, we will work for whoever emerges as candidate of the party under our mutually agreed pact.

Gombe State Chairman of PDP, Abnor Kwaskwabe while speaking said Governor Wike is a man of integrity, an impeccable leader, a bridge-builder, a unifier of men, and whose interest in politics is for the public good.

“This is a man that has touched the lives of Nigerians across the six geo-political zones. This is the man when one of the Northern States had a fire in their market, nobody came to their rescue except, His Excellency, the Rivers State Governor, Nyesom Ezenwo Wike.”