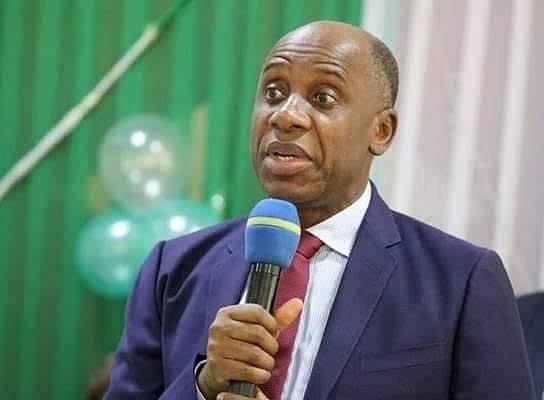 The Minister of Transportation, Chibuike Rotimi Amaechi, has finally joined the league of those gunning for President Muhammadu Buhari’s job in 2023.

Amaechi, two-term governor of Rivers State and Speaker of the Rivers State House of Assembly for eight years, said he is in the race because he is “qualified to serve.”

Though Amaechi is yet to formally declare his aspiration, his manifesto, which will be made public soon.

“What is required is for us to continue to work towards a nation in which the doors of opportunity are open to all our citizens irrespective of ethnicity, creed, class or circumstance.”

Speculations have been rife that the minister, one of the closest political allies of President Muhammadu Buhari, may run for the presidency in 2023.

But he has never denied nor acknowledged that he was interested in the race.

Tracknews reports that Amaechi has been consulting behind the scene and building bridges of understanding. Observers are of the view that given the huge support base he has managed to put together he has become one od the top contenders for the APC presidential flag.

So far, only former Lagos State governor, Asiwaju Bola Tinubu, has formally declared his interest in the race.

Vice President Yemi Osinbajo is also believed to be interest in vying for the party’s presidential ticket but he is still keeping his aspiration close to his chest.

Observers are of the view that entrance of Amaechi into the race will definitely change the fundamentals of the race.

This is more so as some of the new National Executives members who came on board at the recently concluded Convention of the party were actually his sympathizers.

A chieftain of the APC, Amaechi was elected governor twice on the platform of the Peoples Democratic Party (PDP) but left for the then opposition party shortly before the 2015 general elections.

Titled, “Qualified to Serve,” the 86-page brochure, which is his pitch for the APC ticket, highlighted why he decided to contest – his competitive advantages, broad and deep experiences in governance, nationalist outlook, geopolitical considerations, political prowess, personality and leadership, track record of performance, highlights of achievements as Rivers State Governor and Minister of Transportation and what he called “hallmarks of Amaechi’s leadership.”

In what seems like an attempt to address the issue of inclusion, Amaechi said: “We must give meaning to democracy so that every Nigerian can find a place and a voice in a land of free men and women. We must deploy our diversity to increase our strength. We must make our streets and highways, and now forests and farmlands, safe again for all Nigerians to fulfill their individual dreams of a good life so that, together, we can actualize the manifest destiny of this blessed land.”

Itemising the focus of his campaign, Amaechi said, “We need to quickly replace the politics of impressions and personalities with the politics of issues and ideas. We must seek common ground on broad national issues on a bipartisan basis, not on the basis of personalities or geopolitical zones, tribes or factions.

“The common ground must be based on a dispassionate grasp of national problems: how do we educate our children, heal the sick, give hope to those in despair, provide succour to the needy and find work for the unemployed? How do we build infrastructure that will quickly transform and modernize our economy for the good of all Nigerians?

Amaechi said courage, stamina, and resilience are some of the virtues that make him tower above others.

Addressing the question of his Igbo identity he said, “My birth names are Igbo names Chibuike Amaechi. I am an Igbo man. Let no one deny me my Igbo heritage, birthright, ancestry, please!

“Unless you want to be sectional and deny the Igbo people. I have made myself clear repeatedly, that I, Chibuike Amaechi from Ikwerre, am an Igbo man. Our people are Igbo people.”

The minister urged his party, the APC, to look towards Ndigbo for the 2023 presidential ticket.

“As APC prepares to conduct the primaries to choose the party’s flagbearer, they must pay attention to all the geopolitical factors at play.

“Understandably, there is a strong push for power to shift to the South in 2023 and specifically to the Igbos. Igbos have not been at the centre since the Second Republic more than 40 years ago, when late Alex Ekwueme was Vice President in the Shehu Shagari Administration. Not surprisingly there is loud agitation from the Igbos that they should have their turn to lead the government.

“Other groups are also pleading the case of the Igbos in the name of equity and the stability of the country. Leader of Pan Yoruba sociopolitical group, Afenifere, Chief Ayo Adebanjo, has warned that Igbos should produce the president in 2023 election, if Nigeria hopes to enjoy peace. The Association of Arewa Community in Igboland has also urged Nigerians to consent to an Igbo becoming the President of the country in 2023.

“Chibuike Amaechi is an Igbo man of Ikwerre stock. His hometown Ubima is on the border of Imo State and the fact that Nigeria’s modern geopolitical map places it in the South-South region does not change the fact that Ikwerre are a dialectical group of the Igbo nation. By ethnicity, language and heritage, Amaechi is no less Igbo than a man from Abriba, Owerri, Ebonyi, Awka or Enugu-Ukwu.”

Addressing those who insist that only Igbo from the Southeast are qualified since zoning is done on regional basis, the brochure said Amaechi coming from South-South gives him a unique advantage.

“In addition, he also has the unique advantage of being not only Igbo but a Niger Deltan. This means that Amaechi could also find favour with those currently insisting that the next President should come from the South-South on the basis that their region only completed one elected term under President Goodluck Jonathan.

“There are some in other parts of the country who may find it more politically expedient to throw their lot behind a South-South candidate than behind a “traditional” Igbo man.

“As much as Amaechi’s tribe and geo-political zone give him an advantage, he also has the advantage of being a candidate who is a true national figure – recognized all over Nigeria, with friends and allies across the length and breadth of the country.

“Some people vying for office also have recognizable names but are identified so resolutely with their tribe or zone that they cannot be effective national consensus candidates.

“Few of Amaechi’s contenders have had the same opportunity or share the same disposition that allows him to travel to every state of the Federation, forge alliances and build relationships.

“Beloved by his people in the Niger Delta, he is also embraced by the South East as a true Igbo son and lauded in the South West for providing the Lagos – Ibadan railway system which has been a source of pride and renewed economic activity in the region. The North see him as a friend, a truly detribalized Nigerian who does not discriminate against tribe or religion and who has worked tirelessly to support President Muhammadu Buhari.”

Amaechi said the cap fits him because he has a “thorough understanding of the complexities of the nation – the challenges of balancing the interests and influences in a country of different persuasions, traditions, cultures, religions.”

“While others fan the flames of ethnic tension for their own selfish political advantage, Amaechi has consistently championed national unity, identifying ethnic divisiveness as an obstacle to progress.”

Related Topics:Amaechi joins presidential raceinsists he is an Igbo man
Up Next

BREAKING: OBIANO’S FORMER POLITICAL APPOINTEES CRY OUT, THREATEN TO WORK AGAINST APGA IN 2023 IF…