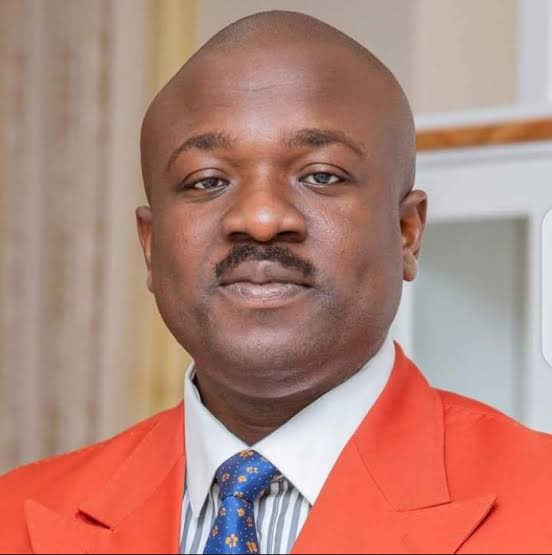 Nuella, A Nigerian lady has just ended her own life after Chinmark, a ponzi scheme disguised as an investment company crashed.

Chinmark founded by Marksman Chinedu Ijiomah and popularized by Amanda Chisom Eze, a known influencer on Facebook was reported to have crashed with investors’ funds running into billions of naira.

Nuella, as gathered by Oriental Times, invested N30 million of her husband’s life savings without his consent.

When news filtered in that Chinmark Group was a scam and has folded up like other Ponzi schemes in the past, Nuella made efforts to get her money back from Marksman Ijiomah, the founder of the Pyramid Scheme, but all her efforts proved abortive. 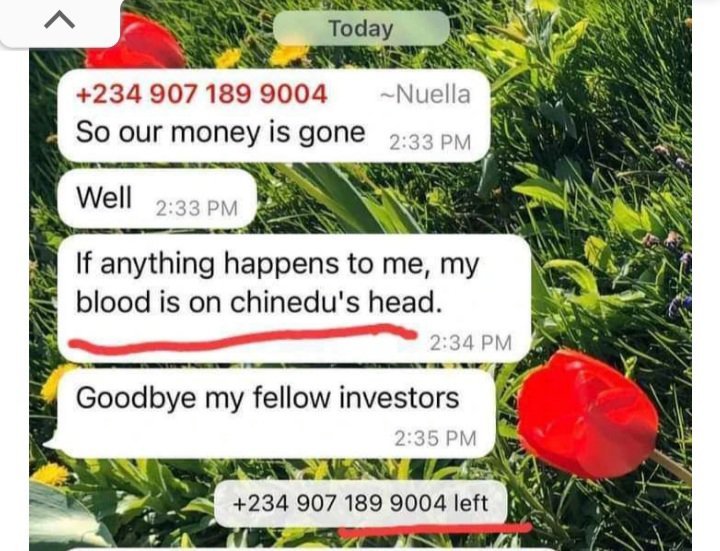 She took to a WhatsApp group created for Chinmark Group investors to disclose she was going to take her life if she doesn’t get her money back.

“If anything happens to me, my blood is on Chinedu’s head,”

Nuella wrote as she exited the group when it became obvious she wasn’t going to get her money back.

She was, however, later rescued and taken to the hospital, with Mr. Charles Awuzie, with a verified Facebook account posting her account details and soliciting assistance for her.

Sadly, the lady has now kept her words as news broke Monday night that she has ended it all.

In a post on his page on Monday night, Awuzie wrote:

“Nuella – the lady who invested her family’s money with you and attempted suicide last month because of you.

Well, she couldn’t handle the disappointment and she left the world today.

I did my best to avoid a possible Chinmark bloodshed…

I was called names, defamed and dragged for trying to stop bloodshed… The court and the blood of those I tried to save will vindicate me at the right time.

As I type this, there are more women in my inbox telling me that they may not make it…

Nothing has broken me like the death of Nuella..

I didn’t know much about her until I learnt about her attempted su’icide… She was so selfless that she wanted to give my gift to her to Chinmark victims who are in more need. It was because of her that I squeezed out more funds to support pregnant victims. No woman has challenged my conscience like Nuella did in the few moments I engaged with her.

Chinmark, you have caused an irredeemable loss.
You have broken the hearts that trusted you.
You have drank the blood of the poor.
Dear Red king, you have been stained with red blood. Is this a coincidence?

My heart is broken….

But this is the end of Ponzi schemes in Nigeria.

At this point, we will activate every tool available to us to bring those who killed Nuella to justice.

Rest in Peace Nuella. There will be no peace for those who killed you.”

About 5000 indignant investors had called out the Chief Executive Officer, CEO, of the Chinmark Group, Marksman Ijiomah, over unpaid funds invested in the company in spite of the many deadlines given for refund.

For weeks, the aggrieved investors have launched trials on social media, dragging Marksman Ijiomah, Chisom, Gwamnishu and all other brand ambassadors who promoted the company on Facebook, Instagram, Twitter and other social media platforms since they began operations.

It was learnt that the investors made payments running into billions under a contractual agreement that the company would on a monthly basis pay a flavour-packed ROI to them.

However, in a press statement released on the 25th day of December, 2021 on its official website, SEC described Chinmark as an “illegal operator”, freezing its accounts.

The Ponzi Scheme head, Marksman, in a recent live video in his Enugu office disclosed that he has ordered the liquidation of the company’s assets.

Meanwhile, amid the endless social media brawls, Amanda Chisom, one of the promoters of Chinmark on Facebook, has said that aggrieved investors of the group have continued to issue threats over her life on the basis of unpaid funds.

In an official statement on her verified Facebook page, Chisom with over 165,000 followers wrote,

“First of all, let me acknowledge my part in being one of those who brought Mr. Marksman Chinedu Ijiomah and his company to limelight, even before the company became registered as Chinmark Group Limited. For someone I have known from the days of his humble beginnings, I felt like I know him to an extent…

“I did my best both professionally and as an individual, to ensure that what is happening now would never have happened, by providing the right advice to the company at all times when I had the opportunity.

“In the build-up to this time, on the 13th of January 2022, I was instructed by the company via an email, to refrain from saying anything about the company on my page and that closes all channels of communication. All effort to find out what was happening was completely blocked.

“I received several warnings and threats from some individuals and investors who felt that my Facebook post on ‘due diligenc’ affected the fortunes of the company. The threats are so far-reaching, that some of these persons have clearly threatened to assassinate me, should anything happen to the company.

“I have informed the relevant authorities of the extent of my involvement with the company and pledged my co-operation in any investigation that may arise.”

Also, Harrison Gwamnishu, another promoter of Chinmark with over 158,000 followers on Facebook said he has gathered about 1,000 investors, even as he assured them that their funds would be recovered.

In a statement on his verified Facebook page on Monday, he wrote,

“From my own end as a friend to Chinmark Group and who also posted and shared his business on my page. Below are steps I’m taking to ensure partners don’t lose out completely.

“I was able to get about 1,000 Chinmark investors through a google link I created and today they will be added to a platform.

“A committee will be appointed by the partners to interface with the company. This is a one-on-one meeting where decisions will be taken.”

Some of the investors who made their stand known in different Facebook posts, said that the current reality is unbelievable and that they would engage whatever means possible in ensuring that they get back their money.

An Akwa-Ibom born, Mercy Udosen, who took to her Facebook page to lament on how she invested a whopping 20 million, said that she has been patient for a positive reply from Chinmark but to no avail she has been left totally disappointed and bewildered.

Another victim (name withheld), stated that Chinmark is the reason for the demise of his father, following the investment of his gratuity funds into Chinmark.

Related Topics:Chinmark Investor Who Invested Husband’s N30m Life Savings Takes Her Own Life
Up Next