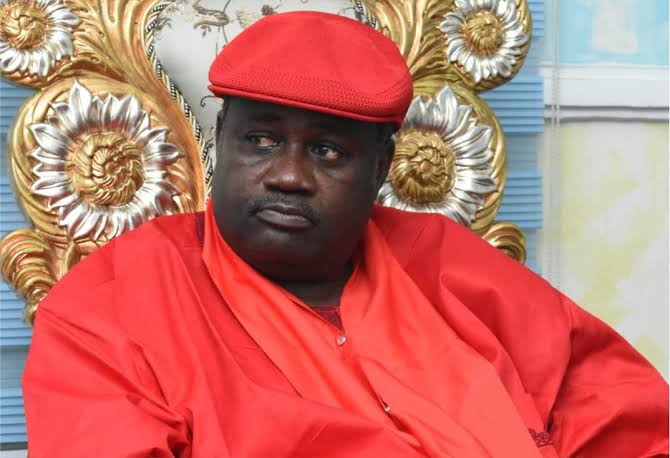 Milford, who was in the community for a project his company is jointly handling with Shell Petroleum Development Company, was on his way to lunch around noon on March 31, 2022, when he came across the entourage of the monarch.

The paramount ruler of Ogulagha Kingdom in Delta State, Joseph Timiyan, has assaulted a young man named Milford and also ordered his security details to humiliate him further.

Milford, who was in the community for a project his company is jointly handling with Shell Petroleum Development Company, was on his way to lunch around noon on March 31, 2022, when he came across the entourage of the monarch.

Upon sighting him, the 64-year-old traditional ruler ordered his police escort to stop the young man and have him sit on the tarred road after which he poured water on him and asked his guards to cut his hair with scissors.

Milford had a punk haircut at the time of the assault by the monarch – a style common with most young people today.
Findings by TrackNews revealed that though there is no law in the community prescribing what hairstyle people can wear or not, the monarch has been going around the community in recent times to mete out similar treatments on young men with haircuts he considers offensive and not in tune with his definition of decency.

Speaking with our reporter over the incident on Tuesday, Milford disclosed that the assault has been emotionally and psychologically traumatising for him, adding that efforts to get justice have been frustrating so far.

“This is injustice and complete humiliation. There is no other word for the way I was treated by the king of Ogulagha Kingdom.
“That fateful day, I had come out for lunch when I saw the king driving with his entourage. Immediately he saw me, he ordered his police escorts to make me sit on the tarred road. He later poured water on me and asked his traditional guard to cut my hair with scissors for no reason.
“I did not commit any offence. I was going about my business when they accosted and humiliated me.

“He thereafter compelled my company to remove me from the project we are handling in the community. It took a lot of pleading from my bosses and other prominent persons in the town for him to allow me to finish my assignment before leaving the place.

“I later learnt that the king had been moving around the town since last week to do the same thing to any young person with punk or dreadlocks. Although there is no law forbidding particular hairstyles in the kingdom, the monarch has been using his power to humiliate young people in the town. This is really sad,” he said.
An aide to the Delta monarch, when contacted by SaharaReporters over the issue on Tuesday, declined to comment.

He went on to ask our correspondent to visit the palace to speak with the king to get clarification on the issue.
Though new in the Delta community, authorities punishing young men for having trendy hairstyles has been a common phenomenon in other places, including Kano State.
For instance, in October 2020, Hisbah officials forcibly shaved the hair of many youths in the state for being ‘un-Islamic’.

The officials also arrested tricycle riders for adorning their ‘Keke’ (tricycles) with photos considered obscene.
Others were punished for wearing three-quarter jeans for improper dressing.

In February 2021, the Kano State Hisbah Corps also arrested a barber from Benue State, Elijah Ode, for allegedly giving his customers haircuts, which ‘offend’ the Islamic faith in the Sabongari area of the state.

EXAGITATORS CALLS FOR MASSIVE SUPPORT FOR THE AMNESTY PROGRAM.