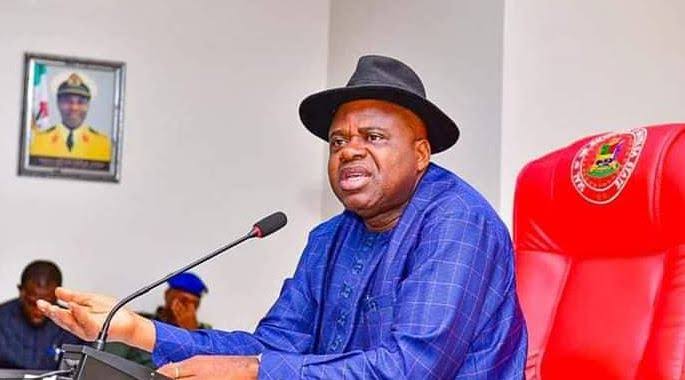 Gov. Douye Diri of Bayelsa has condemned in the strongest terms the invasion of Justice Nayai Aganaba’s Court by hoodlums.

Diri made this on Wednesday at the reception and launch of a book titled, ‘Astute Judgments and Essays’ written as part of activities commemorating the retirement ceremony of Justice Aganaba in Yenagoa.

He called on security agencies to partner with the state government to provide adequate security for judicial stakeholders to enable them discharge their constitutional functions without fear of intimidation.

He lauded the Judiciary for its commitment to the administration of justice and protection of the oppressed and vulnerable in the society.

The governor described Justice Aganaba as an erudite, incorruptible and courageous Jurist who triumphed even in the face of daunting challenges.

“I knew Justice Aganaba as a legal practitioner in the old Rivers state before the creation of Bayelsa State. He is an astute, incorruptible, erudite and courageous Jugde.

“I call on the police and other sister security agencies to partner the government in providing adequate security in our court premises and for all Judges.

“`This will help to avoid the reoccurrence of what happened on April 13,” he said.

Diri, who also applauded the State Chief Judge, Justice Kate Abiri, for her steadfastness and commitment to duty, lauded her efforts in ensuring that Judicial officers and Judges were given their rightful places in successive administrations.

“I want to again commend the state Chief Judge for her commitment towards ensuring that Judicial officers and indeed all the Judges in the state Judiciary were properly catered for,” he said.

Earlier at a valedictory court session held in honour of the retiring Judge, Justice Abiri, said Justice Aganaba was a respected Jurist who put in 20 meritorious years in service as a Judge.

She said that those who attacked the retiring Justice Aganaba while on duty would face the wrath of the law.
Abiri also commended the state government for granting the state Judiciary financial autonomy.

“As an arm of government, the Bayelsa state Judiciary has enjoyed autonomy. And I make bold to say that the state government has not held back any fund to the judiciary since the financial autonomy status was granted us,” she said.

The News Agency of Nigeria (NAN) reports that the retiring Justice Aganaba was called to the Bar in 1982 and appointed as a Judge of the Bayelsa Judiciary in 2001 by the first Governor of the state, the late Chief DSP Alamieyeseigha.

The News Agency of Nigeria (NAN) reports that on April 13, Justice Aganaba was supposed to give a ruling over an intra dispute concerning the state chapter of the All Progressive Congress (APC) when suspected hoodlums taking advantage of the commotion created by the larger number of people in the Courtroom invaded the court and disrupted proceedings.

NAN reports that the Bayelsa Police said that it had put two suspects in prison custody following their arrest in connection with the invasion of the state High Court.

Tinubu Denies Link With Poster Comparing Him To Jesus, Osinbajo As Judas