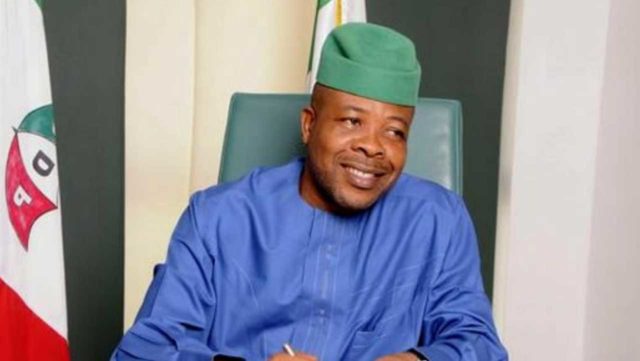 “The word of the reckless pierces like a sword, but the tongue of the wise brings healing” Proverbs 12:18.

Imo State, the Eastern Heartland, is under siege and bleeding. Gun-wielding men, perpetuating violent crimes are having a field day. No one is safe, not even the security agents. The once peaceful State is now enveloped in fear, trepidation, and anxiety and the innocent citizens are at the receiving end.

Curiously, it appears the State is running an absentee government. Governor Hope Uzodinma-led administration has been evasive and nonchalant to the plight of the people, although he has been trying to give a different impression to people outside the state.

But, how did we get here? At least, we had the administration of former Deputy Speaker of the House of Representatives, Rt. Hon. Chukwuemeka Nkem Ihedioha, preside over the same state for about seven months and during the short span, Imo people saw what real governance was and they are still salivating the incredible experience.

While it is expected that the ruling All Progressives Congress (APC) in the state should sit up and tackle the hydra-headed menace threatening the heart of Imo State, those within the inner circle of Governor Uzodinma are apparently preoccupied and jittery over the growing popularity of Ihedioha on the streets and on every lips.

As a result, the state government is leaving no stone unturned to discredit him, label him and possibly link him to the mindless killings going on in the state. Governor Hope Uzodinma-led administration has shown how desperate they are by linking the inability of the government to protect lives and properties to the opposition, Peoples Democratic Party (PDP) in the state. In fact, Governor Uzodimma is beginning to sound like a broken record with his constant accusation of the opposition and creating disaffection against Ihedioha.

Despite all these, the people are still inclined towards Ihedioha and make no mistake; they are determined to return him as the next governor of the state because his reputation and respect are still intact. And his short-lived administration remains remarkable with many residents because many Imolites are yet to recover from the shock of his exit from the government house.

The people of Imo State really felt the presence of government and enjoyed democratic dividends under Ihedioha’s administration and he remains one of the most popular politicians in the state after Chief Sam Mbakwe, the first democratic governor of the state.

Ihedioha’s achievements have continued to dominate political discourse in the state and he remained the reference point for the current administration in the state.

As a governor, he showed capacity in turning the financial fortune of the state around, which cumulated into the achievements he recorded in the state within a short period. Ihedioha is credited with initiating key policies that enhanced fiscal responsibility in the State. These include the introduction of the Treasury Single Account (TSA), which reduced the state’s accounts from 250 to one; the Central Billing System (CBS); the Open Government System (OPS) and the reactivation of the Bureau for Public Procurement and Price Intelligence.

As a result of his policy measures, the National Bureau for Statistics (NBS) named Imo State as the least corrupt state in Nigeria in 2019, with a record low 17.6 per cent corruption prevalence from 34th position in 2018. The former governor is also known for embarking on widespread infrastructural projects like the reconstruction and rehabilitation of 25 intracity and intercity roads and the establishment of the state’s Rural Electrification Agency to confront the disconcerting power supply in the state.

Ihedioha’s administration also installed accountability and fiscal discipline, which eliminated immense leakages in the financial system of the state. This single effort also pushed up the internally generated revenue of the state from N250 million to N1.2 billion and rekindled investors’ interest in the state.

Ihedioha also took proactive measures in restoring the dignity of the state civil servants and the pensioners by increasing their salaries and payment of pensioners’ entitlements after six years of non-payment. The administration ensured the full release of monthly financial allocations to the 27 local councils by guaranteeing regular joint accounts meetings.

For instance, the president of the African Export and Import Bank, AfrixBank, Prof. Benedict Okechukwu Oramah, visited the state in December 2019 and signed a Memorandum of Understanding with Ihedioha to invest over N62 billion in the state’s economy. Unfortunately, this investment blueprint was withdrawn by the organization over the poor investment climate.

Likewise, the state on December 6, 2019, received an award from the Minister of Communication and Digital Economy, Dr Isa Pantami, as the best-developed state in ICT development and second runner-up in e-government.

These achievements were as a result of Ihedioha’s decision to create the Imo State Ministry of Technology Development upon the assumption of office. Also, BusinessDay Newspaper recognized the state as the fastest growing economy in Nigeria in its 2019 state competitiveness and good governance award.

Under his administration, there was relative peace in Imo State with the people fully cooperating with the government state and security agencies in providing security of lives and properties. Unlike what is obtainable in the state today where lives have become meaningless and worthless with the mindless killing of innocent people on a daily basis.

Imo State is one of the worst places to live in the South-East currently with a high level of insecurity. There is hardly a day that passes without unknown gunmen shooting, killing or burning down either a police station or and office of the Independent National Electoral Commission (INEC).

The statistics of killings in the state may not be readily available but there is no community in the state that has not received the onslaught of the unknown gunmen with the hometown of Governor Uzodimma as the centrepiece.

This current situation in the state is quite different from what the people experienced during the administration of Ihedioha and the reason is not far-fetched. The former governor ran a populist government and was always at home with the people, sharing in both their moments of grief and triumph.

As a member of the House of Representatives, Ihedioha showed that he is a legislative colossus. This was largely instructive in the steady and episodic manner he was returned by his colleagues to occupy the principal position of Chief Whip and presiding seats of Deputy Speaker and Speaker within two out of his three tenures in the House between 2003 and 2015.

No doubt, posterity will always remember Ihedioha in the history of Imo State. But like he said in his thank you speech after his removal by the Supreme Court, “I am firmly resolved never to give up on the struggle for a better Imo State and for a better governed Nigeria.”

As political activities resume, Ihedioha remains not just the choice of PDP and Imolites but also other Nigerians that desire to see peace return to the land of Heartland. With the former governor returning to the ballot with his ‘Rebuild Imo Agenda,’ victory and peace of mind is sure for the people of Imo State.

Dumebi Ifeanyi is a businessman and Political Analyst based in Abuja.

Related Topics:Emeka Ihedioha: Still the Beautiful Bride of Imolites
Up Next

2023: Osinbajo Tells Olubadan Reason He Should Be The Next President