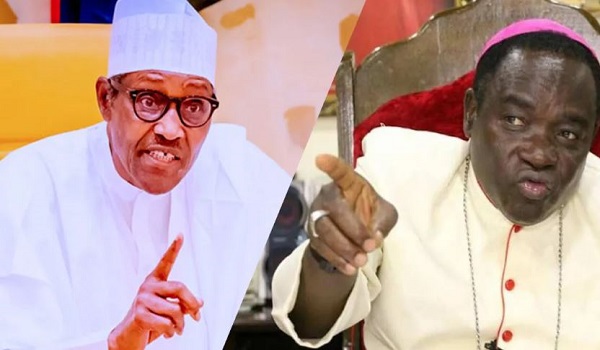 Catholic Bishop of Sokoto Diocese Matthew Kukah has said his criticism of President Muhammadu Buhari’s administration is not a personal attack on the country’s leader.

The cleric has been in the news over his Easter sermon, in which he said the Buhari administration was in hibernation mode, while the country was broken and divided.

He said the only thing thriving in the country was corruption, warning that Nigeria must be reclaimed from its impending slide to anarchy.

His commentary spurred a response from Garba Shehu, presidential spokesman, who accused Kukah of always spreading hate against his principal.

Reacting to the claim in a chat with Arise TV yesterday, Kukah reiterated that Buhari “has done a bad job as president”, adding that “even his wife has also disagreed with his policies”.

He challenged the presidential spokesperson to point out “one thing about the message that I preached that you disagree with and let’s discuss”.

“Those saying I attacked the president, I have never attacked his person. All I have spoken about is his inability to manage diversities effectively and efficiently. I studied diversity as a subject, and I know what I am talking about,” the bishop said.

“Those who think these things are personal will see that I have never talked about his person or character. I believe he is a gentleman, but as far as being the president is concerned, he has done a bad job. I’m not the first person to disagree with Buhari’s policies, even his wife has done so.

“So, those guys should not sit in their air-conditioned office drinking coffee and thinking everything is honky-donkey. Let them disagree with the text of my message.

“Let me set the record straight, I delivered my sermon to my congregation and the message. The bearers of the message are directed primarily to the good people of Sokoto diocese.

“The President knows that I have great respect for him, and he is a gentleman, but he has done a terribly bad job as the president of Nigeria.”

Related Topics:Kukah: my criticism of Buhari not personal
Up Next