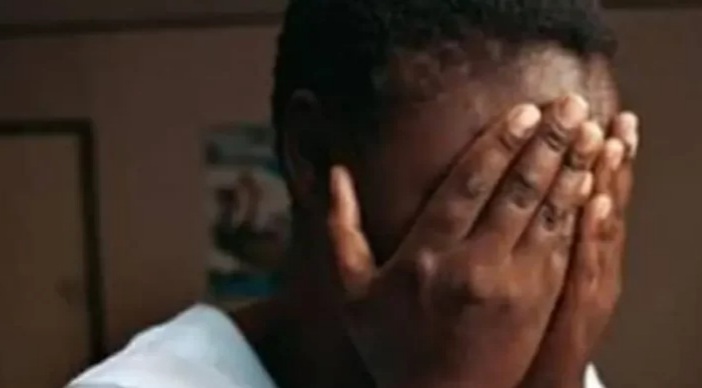 A 28-year-old man identified as Tolulope Akinyemi has been remanded in prison by a Magistrate Court, sitting in Ondo State, for allegedly raping his teenage step-sister.

There were claims by the victim that Akinyemi impregnated her twice and aborted the pregnancy.

The suspect was arraigned before the court on a two-count of rape and manner likely to cause the breach of peace for forcefully having carnal knowledge of his blood sister.

Police prosecutor, Bernard Olagbayi noted that Akinyemi committed the offence on April 18, 2022, at about 10:00 pm at road 4, Valentino Quarters, Ondo.

The charge against the defendant read, The charge read in part, “That you, Tolulope Akinyemi on April 18, 2022, at about 10:00 pm at road 4, Valentino quarters, Ondo, Magisterial District did willingly, unlawfully and indecently have carnal knowledge of your 17-year-old blood sister (name withheld) at your backyard and thereby committed an offence contrary to and punishable under section 358 of the Criminal Code Cap 38 Volume 1 Laws of Ondo State of Nigeria, 2006.

“That you, Tolulope Akinyemi on the same date, time and place in the aforementioned Magisterial District did willingly, and unlawfully conduct yourself in a manner likely to cause the breach of peace by forcefully having carnal knowledge of your 17-year-old sister (name withheld), and thereby committed an offence contrary to and punishable under Section 249(d) of the Criminal Code Cap 38 Volume 1 Laws of Ondo State of Nigeria, 2006.”

Olagbayi prayed the court to remand Akinyemi in correctional centre, pending advice from the Director of Public Prosecution of the State Ministry of Justice.

The magistrate, Charity Adeyanju in her ruling directed that the case file to be transferred to the DPP for advice, and adjourned the case till June 14, 2022.

The victim while speaking on the case said her step-brother molested her and threatened to kill her if she reported it to anybody.

She said “One day, when my brother was having sex with me again, his son, Samuel, saw us and went to report to his mother. My brother’s wife reported the case to the family and they later settled the matter. Thereafter, my brother took me to one doctor to abort two months of pregnancy for me.

“We all live in my father’s house. But we are from different mothers. I told the family of my intention to leave the house for my brother so I can stay in another place. But my brother kicked against it. My father is still alive, but he is ill. And I am the one taking care of him since our mothers are dead. My brother is married with four children.

“My brother cursed his son that saw us together and the boy died the following day. The incident scared me the more. So, I kept the illicit affair to myself. It was because his son died that made his wife, my sister-in-law, leave him and ran away with the other children. When I got pregnant again, I had to tell some people about my predicament. So, they directed me to the police station where I reported the case and my brother was arrested and charged to court.”

Related Topics:My Step-Brother Threatened To Kill Me – Sexual Abuse Victim
Up Next