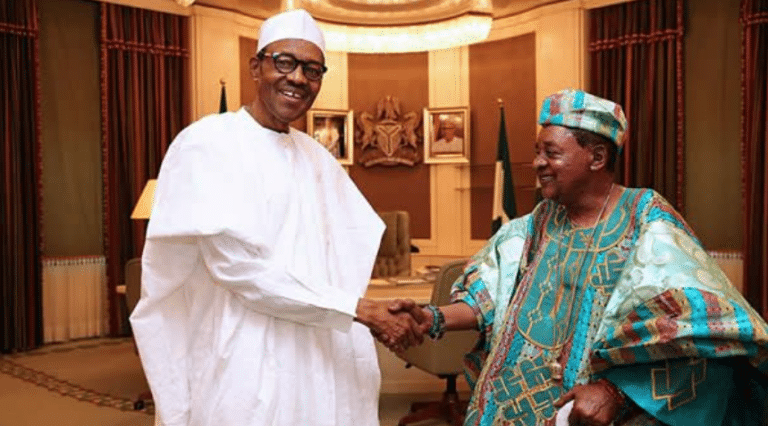 President Muhammadu Buhari has said the teachings and promotion of peace and stability of the Alaafin of Oyo, Oba Lamidi Adeyemi III will be sorely missed.

Buhari made this known in his condolence message over the demise of the foremost traditional ruler who joined his ancestors on Friday.

It was gathered that the Yoruba traditional ruler was reportedly receiving treatment at the Afe Babalola University Teaching Hospital, Ado Ekiti where he later died.

In a statement on Saturday issued by his spokesman, Femi Adesina, the Nigerian leader said the monarch’s 52 years of rule in the Oyo Kingdom was a success and a blessing to the people of Oyo State and the country as a whole.

The President added that Oba Lamidi promoted human development and encouraged learning as a culture and formal education in the country.

Buhari, therefore, commiserated with the entire people of Oyo, the State Traditional Council, his family, friends, and associates over the demise of the monarch.

The Nigerian leader prayed that the Almighty God should grant him eternal rest and receive his soul.

The statement read, “President Muhammadu Buhari condoles with the Government and people of Oyo State over the passing of Alaafin of Oyo, Lamidi Olayiwola Adeyemi III, 83, whose reign covered major historic transitions in the country, and witnessed transformations in his domain.

“The President affirms that the Alaafin of Oyo’s 52 years of rule was remarkable in many ways, most significant was the emphasis he placed on human development, thereby encouraging learning as a culture and formal education as a necessity while promoting values of peace and stability.

“As a highly revered traditional ruler, President Buhari notes the late monarch’s numerous participations in national meetings and conferences to shape the future of the country, and the living words of wisdom he shared at every opportunity on unity and people-focused governance.

“The President shares the grief with the Oyo State Traditional Council, Oba Lamidi’s family, friends, and associates, particularly in sports where he left another footprint.”

Related Topics:Oba AdeyemiWhat Buhari Said About Late Alaafin Of Oyo
Up Next

Why Buhari Has Failed To Curb Insecurity, Bad Economy – Yakasai