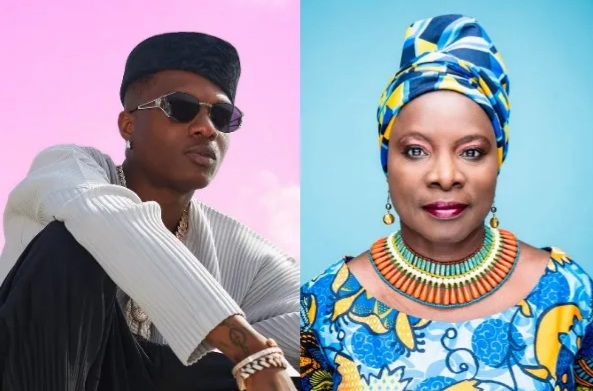 Since Angelique Kidjo won her fifth Grammy award for her album, Mother Nature, at the 64th edition on Sunday night, it has been generating ripples among a legion of Nigerian music fans.

It was also Kidjo’s fourth win in the World Music Album category, almost making her a favourite to win each time she submits her body of work for consideration for that category. Anyone who has been following the Grammy would not have been surprised by the 61-year-old Beninese singer’s win. But not for members of Wizkid FC, a name that has been adopted by fans of Nigerian hip hop singer, Wizkid, who felt slighted that their idol did not win the category many of them were confident he would win to increase their bragging right. LEGACY + by Femi Kuti and Made Kuti was also nominated for the same category, but it seemed many did not even notice that another Nigerian album was in the mix. It seemed like a two-horse race between Made in Lagos Deluxe Edition and Mother Nature.

There have been criticisms about the selection of Mother Nature’s win has received a lot of criticism from some Nigerian music fans who claimed their favourite was robbed by the Recording Academy, many of these claims have not been factually substantiated. A few people quoted album sales and streaming records wondering why Made in Lagos Deluxe Edition, an album that sold more, ranked higher with streaming numbers, would lose out to Angelique Kidjo’s own.

The answer lies in the process of determining who walks away with the statuette.

WInning the grammy begins with Academy members and record companies submitting songs and music videos for consideration into any of the 84 categories within the eligibility period, which runs from October 1 of one year until September 30 of the next year. Thus, the works that were considered for the 2022 awards were released between October 1, 2020, and September 30, 2021.

More than 350 experts in various fields go through the submissions during the screening process to ensure that the works submitted meet the eligibility criteria and belong to the correct category.

The 12,000-voting member of the academy, which comprises artists, producers, and musicians, vote in the first round of nominations to determine the five entries that will make it to the shortlist. To ensure quality, members are directed to vote only in their areas of expertise. They may vote in up to ten categories across up to three genre fields.

After the shortlists have been announced, the 12-member committee again vote to determine which of the five shortlisted works should win. Members again vote in up to ten categories across up to three fields in the genre fields. They are also directed to vote in their area of expertise.

According to the Academy, “ballots are tabulated by the independent accounting firm Deloitte Touche Tohmatsu. The entry with the highest number of votes wins. In cases of ties, the two or more shortlists win. This has happened 29 times in the Grammys’ history. The winner receives a statuette, while all nominees receive a medallion and certificate.

Related Topics:Wizkid and Angelique Kidjo: Here’s how the Grammy voting actually works
Up Next

Actress Bukunmi Oluwasina Issues Caution On Use Of Social Media