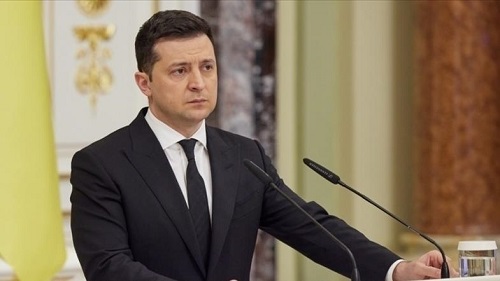 Ukrainian President, Volodymyr Zelensky has thanked the U.S. for arms assistance and called for tightening of sanctions on Russia.

“We discussed defence assistance with U.S. Secretary of State Antony Blinken and Secretary of Defence Lloyd Austin during their visit to strengthen sanctions on Russia.

“They should also increase financial support for Ukraine and security guarantees,” Zelensky announced on his official Telegram channel.

He said the arms aid, amounting to 3.4 billion dollars so far, had helped Ukraine a lot in its national defence.

Zelensky said at the same time, it was important to limit Russia’s potential for attack by imposing tougher sanctions.

He referred to an action plan already developed by Andriy Yermak, the head of the Ukrainian presidential administration and Michael McFaul, the former U.S. ambassador in Moscow.

Zelensky said it was important for the Ukrainian economy to have better access to the U.S. market for its goods. (dpa/NAN)

Related Topics:calls for new Russia sanctionsZelensky thanks U.S. for arms aid
Up Next