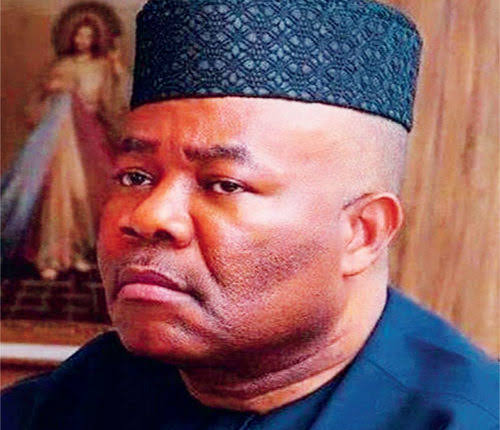 Ahead of the 2023 general election, a renowned Niger Delta group, Movement for the Survival of Izon Ethnic Nationality in Niger Delta (MOSIEND) has called on the Economic and Financial Crimes Commission (EFCC) to probe the Minister of Niger Delta Affairs, Senator Godswill Akpabio, over alleged money laundering in the Niger Delta Development Commission (NDCC).

The group is also calling on the Chairman of the Independent National Electoral Commission (INEC), Prof Mahmood Yakubu; and the leadership of All Progressives Congress (APC); to disqualify Akpabio from the presidential race.

A statement signed by the Zonal Secretary, MOSIEND, Godwin Opiuyo, accused Akpabio of using monies laundered from the NDDC to finance his 2023 Presidential ambition.

The group further called on the Secretary to the Government of Federation, Boss Mustapha, to urgently sack Akpabio, and others, and direct the highest civil servant or director in the ministry to take over the commission from him.

The statement called on the anti-graft agency to immediately begin the probe of Akpabio and others involved in the alleged misappropriation of monies in the commission.

Opiuyo insisted that EFCC should be given free hands to carry out its investigation on Akpabio without unnecessary interference by political parties or groups.

MOSIEND expressed worry that Akpabio had failed to resign his position before vying for elective office such as the office of the Presidency.

“We disagree with Akpabio over his reason for not resigning along with others before contemplating to run for number one elective position in the country.

“We are calling on the SGF to sack Akpabio and probe the monies laundered from the NDDC to finance his Presidential ambition”.

The group noted that,”when we say Niger Delta politicians with credible credentials should come and contest for Presidency, we never contemplated Senator Goodwill Akpabio at all, Akpabio is not going anywhere with Niger Delta monies, but we need someone with good track record and a disciplined Niger Delta indigene, not Akpabio”.

EXAGITATORS CALLS FOR MASSIVE SUPPORT FOR THE AMNESTY PROGRAM.