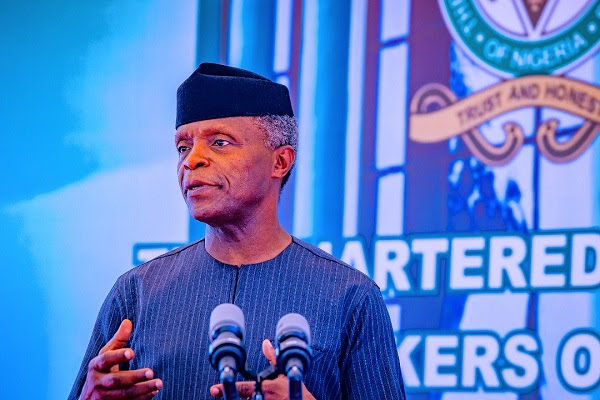 The Vice President of Nigeria, Professor Yemi Osinbajo on Wednesday visited Adamawa State and met with delegates from the All Progressives Congress (APC).

Tracknews gathered Osinbajo met with the APC delegates behind closed doors at the multi-purpose Hall of the Muna Hotel in Yola, the state capital.

Though journalists were not allowed into the venue of the meeting, the Vice President spoke briefly with newsmen after his meeting with the party delegates.

Describing the delibrations as fruitful, Osinbajo said the purpose of his visit was to consult with the APC delegates from the state about his 2023 presidential ambition.

“I came here to have a discussion with our delegates. We have very useful and robust discussions.

“All of it was directed at various ways by which we can do great things for our country and how we can make progress. A lot was said and done here today and I can say that the future is very bright.”

During his time in Adamawa, Osinbajo who was received upon arrival in Yola, by Governor Ahmadu Fintiri, visited the Lamido Adamawa Palace in Yola Town, in the company of his host where both of them were received by the traditional ruler, Muhammadu Musdafa.