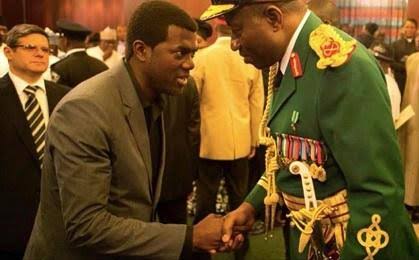 There were claims in the late hour of Wednesday that the former president had dumped the Peoples Democratic Party for the ruling APC to pursue his presidential ambition.

It was stated that Jonathan joined the APC in his Ogbia ward in Bayelsa.

A claim which has been denied by the Chairman of the party in Bayelsa State, Dennis Otiotio.

According to Otiotio, Jonathan can only join the ruling party if granted a waiver by the national chairman of the party, Adamu Abdullahi.

Reno in a post on his Twitter account while reacting to a post by Tribune on the alleged defection of the former president, wondered how Jonathan who was not in Nigeria at the time quoted in the report could have defected to the APC.

Omokri noted that his former boss was out of Nigeria on the 12th of May which makes it impossible for him to register his membership with the ruling party.

The former presidential aide in the post wrote, “Dear @nigeriantribune,

“I read your story. You reported that former President Jonathan “officially joined the APC on Wednesday, 12th May 2022, in his country home in Otuoke.

We informed, lobbied Senate before we went on strike – ASUU lambasts Lawan