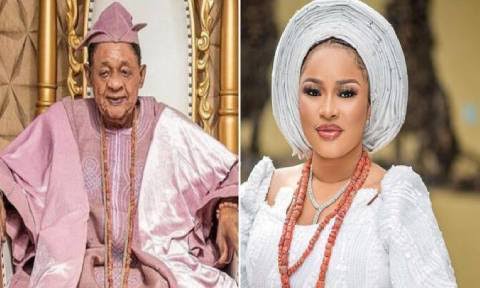 Drama has already started following the death of Alaafin of Oyo as a video that surfaced online reveals the moment one of the late king young wives, Quee Dami was chased out of the palace after she returned upon hearing Alaafin’s demise.

According to reports, Queen Dami, who had initially left the palace and abandoned the king, finally returned upon news of the monarch’s death.

However, Dami’s return was not met with celebration and she was reportedly disgraced from the premises.

In a video shared by Anonymous and controversial blogger, Gistlover, via official Instagram page, one of the late king’s people was heard questioning the young queen on why she was at the palace. The lady in the video, who is said to be one of the late king’s daughters, was also seen raining heavy curses on the olori.

Also in the video, the same lady was heard saying that she did not want to see Queen Badirat and all the other young oloris who abandoned the palace when the Alaafin was still alive. According to her, there would be more trouble if they dared to show their faces on the premises.

Gbas Gbos: Queen Damilola of OYO Kingdom and her mother disgraced out of the palace yesterday.

Information reaching the Vawulence Headquarters be say as the king die naso one of him junior wife wey don leave palace came back to the palace to claim her own part of the property, una remember Queen Dami now, the lady wey all Vawulence Nation contribute money for that time wey come later do public apology for Baba, I tell una say after the public apology sef them no still accept her back, well she was at the palace with her mum yesterday and Na Gbas gbos the matter take end, you can see in the video above, one of Baba people warning all the junior wives that left the palace before Baba passed on , say she no want see them for Palace, even Badira( Queen ola) say if them show face Na flying broken bottles go meet their head, the lady talk say Shebi them don happy as the Oga don die now, say make them keep it moving oooo, Who go settle this matter bayi, More drama to unfold in the next couple of days, meanwhile make una hold una husband tight oooo😂😂😂the Queens are Outside now, lowkey sef them Dey knack some of una Husband before, but as them don free now, Na to carry mattress come😂😂😂😂 i come in peace

Related Topics:Drama: Why Quee Dami Was Chased Out Of Alaafin Of Oyo Palace
Up Next