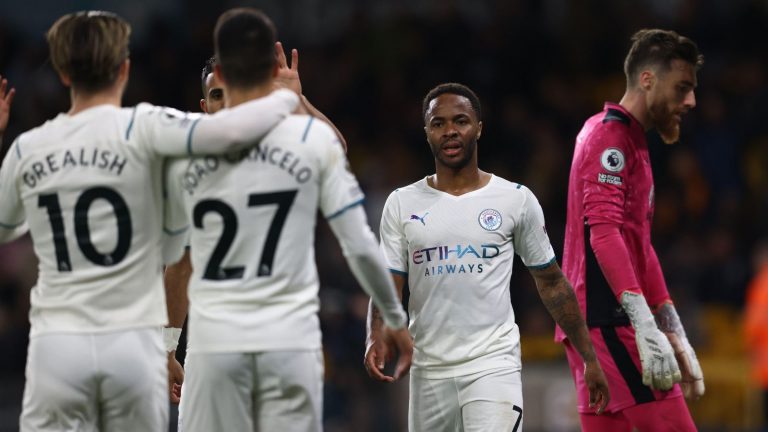 According to reports, Manchester City and England forward Raheem Sterling is not interested in joining Arsenal or Tottenham Hotspur.

Sterling is currently on the verge of winning his fourth Premier League title.

The Englishman has grabbed 17 goals and eight assists in 47 outings this term. He has started 23 times in the Premier League.

The Athletic are reporting that Sterling is planning to ‘wait until June before holding negotiations and making a decision over his future’.

Sterling’s contract expires in 2023. They add that he has ‘no desire’ to join Arsenal and it is being denied that Tottenham are ‘frontrunners’ for him.

It is added that his ‘long-held expectation is to join one of a small number of Europe’s most decorated teams’ if he leaves Man City.

The Brazilian has been linked with Arsenal for some time with those rumours ramping up in recent weeks.

The announcement that Erling Haaland will be at the Etihad next season has further led to speculation that Jesus will be surplus to requirements.

Mikel Arteta has made no secret of his desire to sign a striker in the summer and is a big admirer of Jesus – who has scored 13 goals in all competitions this season – after the pair worked together before the Spanish boss swapped City for Arsenal.

Goal claim the Gunners have made an opening bid of £42m with director Edu in charge of negotiations, but it’s claimed City are holding out for a fee closer to the £50m mark.

Jesus’ agent Marcelo Pettinati confessed on Wednesday that the English side are just one of seven teams interested in the Brazilian.

He said: “We had talks with Arsenal about Gabriel Jesus, we like the project – it’s a possibility we’re discussing. There are six more clubs interested in Gabriel – he’s focused on final games with Man City, we’ll see”.

Related Topics:ArsenalSpurs ruled out as Man City star eyes move to ‘one of Europe’s most decorated teams’
Up Next