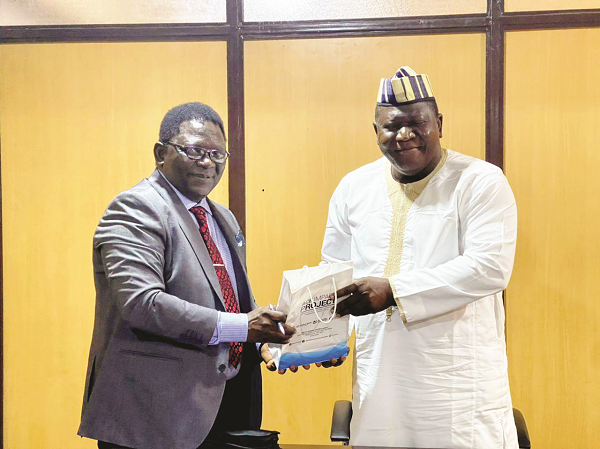 The Committee of Vice Chancellors of Nigerian Universities (CVCNU) is partnering Egyptian varsities, through the Association of African Universities, on medical exchange as well as resolving the problem of intellectual property and internet infrastructure to achieve digital transformation. But, the Medical and Dental Council of Nigeria (MDCN) is not happy that it’s being left in the cold on the programmes. FRANK IKPEFAN and MOSES EMORINKEN report.

For several years, medics have expressed concern over the falling standards in the medical training.

They have complained about admission policies, inadequate facilities and brain drain, among others. They have recommended actions to tackle the problems at the country’s medical schools, which have 30,111 spaces for medicine. In 2019, over 436,799 candidates applied to study medicine in universities with only 30,111 spaces.This represented 7.95 per cent of available capacities.

According to reports, the Medical and Dental Council of Nigeria (MDCN) determines the number of students each college of medicine should admit.This is determined by some variables: staff strength, especially in pre-medical faculties; the capacity of teaching and research facilities and funds for renovation and expansion of facilities.

The VCs have also decided to work with the Nigerian Copyright Commission to develop intellectual property model and policy that will guide its use in the universities.

But, the Committee of Vice- Chancellors of Nigerian Universities (CVCNU), during the week, said it was partnering universities in Egypt to initiate mexchange programmes. The body said this would address the problem of low capacity of medical education studies in the universities.

Its Secretary-General Prof. Yakubu Ochefu said this in Abuja while speaking on the partnership of the committee with the Association of African Universities (AAU), specifically with universities in Egypt. According to him, the capacity for medical education in our universities is less than eight per cent of demand.

He said: “At the level of National Universities Commission, JAMB and the Medical and Dental Council of Nigeria and that of individual university, specifically vice chancellors, are worried about this development, which may become a crisis. This issue is very alarming and the Committee of Vice Chancellors has decided to do something about it.”

Ochefu noted that the low capacity necessitated the deal.

He added that what they were doing was to initiate medical mobility exchange programme between Egyptian universities and our universities.

He said the Egyptians have helped set up several medical schools in Maiduguri, Kano and Sokoto and that they wanted to extend that relationship to other universities in areas such as exchange in staff training, learning materials and postgraduate students in medical studies.

He added that with the help of the Egyptians, Nigeria should be able to reduce the figures in the next five years.

MDCN not comfortable with programme

But, the Registrar, MDCN, Dr. Tajudeen Sanusi, was baffled about the medical programme.

Sanusi said: “I am just hearing about this. That is the problem we have in Nigeria, in the sense that when you train doctors, the regulatory bodies must be involved. They are trying to have something with them over there and they don’t let us know. Then, before you know it, they will say the MDCN is causing trouble. No, we are to safeguard the health of Nigerians and other people living in this country.

“Those countries have their own standards, and we have ours. For example, in some of the Eastern blocs, after they have been awarded the degree of MD, they will now go for another one year training in some designated hospitals, after which they will now sit for what is called licensing examination before they are licensed to practice. Our own is a bit different. That is why from day one, the clinical aspect is part of our training. Therefore, those people that are going to say this and that are part of our problems.

“When we tell them to employ only medically qualified people to teach medical students, they will not employ them. That is the problem. Some of these things go a long way to affect the quota we are going to allot to these universities.

“Some of those failing our exams here trained in Egypt and Sudan. You cannot say because you are a vice chancellor, you can go and do this or that. You have to involve the medical teachers in charge. When you involve the medical teachers, they will be able to assess what they do over there vis-a-vis our own and advise you. The fact that you are a vice chancellor does not confer all the knowledge on you. They fail to realise that.

“For example, two universities find it difficult to create the Department of Medical Sciences. Now, they are coming together as a Committee of Vice Chancellors – as what? People are finding somewhere to hide their inefficiencies. We are not saying they cannot collaborate, but let the professionals represent them and advise them. Therefore, the way those countries train their people is different from the way we do it. While we are not condemning them, their system suits their purpose, and ours suits us.

“There is something we call electives for the students to go overseas for one or two months. Frankly speaking, those electives are not helpful. For example, when Babcock University started, they organised three months’ elective for their medical students in one of the medical schools in India. They had to stop it. It is not helpful because the reasons prevalent here are not the same as their.”

However, the AAU has explained how universities on the continent could attain digital transformation. It noted that there was the need to resolve the internet infrastructure issues before this could be done by the universities.

Secretary- General of the AAU, Prof. Olusola Oyewole, who stated this in Abuja during the visit by the Committee of Vice Chancellors, said the association is eager in realising its continental initiatives.

Oyewole, who said the AAU was concerned about the growth of higher institutions on the continent, said the partnership would provide adequate network for the association.

He said: “Africa has the largest number of universities in the world. Nigeria has the highest of these universities. The AAU has membership with the CVCNU and so, the AAU will be glad to collaborate with the committee of vice chancellors. That is why we have come to seek your support as CVC to assist the AAU serve her members better.”

Oyewole said the AAU, an organ of the African Union Commission, will like to work with Nigeria.

“Rising from lessons from COVID-19, if we don’t solve the internet infrastructure issues, we will continue to struggle with digital transformation,” he said.

The director said Nigeria should learn from Kenya, South Africa, Uganda and other countries in North Africa on their successes on internet infrastructure for education.

She called for the restructuring of the management of NGREN, stressing that Nigeria should look beyond personalising the leadership of the facility.

She said: “We discovered that when KNET was set up in Kenya, its ownership was taken over by vice chancellors. They appointed its officers, but the reverse is what is case in Nigeria. When vice chancellors take over the NGREN, it will be more effective.

“NGREN should provide free and untaxed internet for the universities to meet students’ needs. We need look at it without personalising who has been running it over the years. No one must be injured if we decide to appoint a competitively appointed CEO for NGREN.”

18.5 million children out of school under Buhari: UNICEF