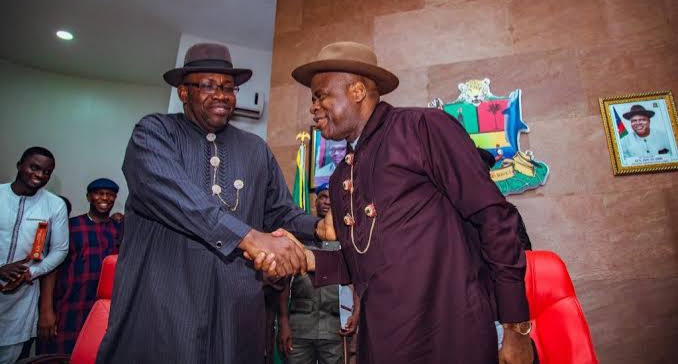 Preceding any election in Bayelsa State, the ugly Nigerian political culture of decamping gradually sets in and builds up until its peak on the day of voting.

This season is usually characterised by propaganda and an unhealthy quest by political gladiators to either seize or retain control of the existing political structures.
Senator Henry Seriake Dickson is the first governor ever in Bayelsa State to successfully complete two terms with undisputable visible proofs. He is also the first ever to midwife a political transition that was successful even though his choice of successor, Senator Douye Diri was not a preferred or popular candidate both within the PDP and across Bayelsa State.

It is no secret that Diri’s political journeys as well as many others like him in and out of government today are conscious and deliberate creations of Dickson.
Dickson’s political ingenuity cannot be ignored.

He was and still remains the master of debates, consultations, negotiation and dialogue, political tools he is known with, respected for across the country and still employs even at the national Assembly.

A few uninformed persons have alleged that there exist a cold war between Dickson and Diri but the question is, to what end?
The former governor while in office, performed excellently with lasting proofs and since the emergence of Diri, has for dignity sake maintained a distance from the state house unlike other political leaders of his class both within and without, who insist on exercising their influence whether required or otherwise and this is well known by all Bayelsans.

What actually is of great concern and in certain cases worrisome to Bayelsans and indeed the Ijaw nation is the lethargic approach of governor Diri in addressing political, administrative and leadership issues which leaves room for comparison as well as resulting in the faulty and mischievous perception in some quarters of him being under the political clutches of Dickson even after spending over two years in office.

Dickson built and sustained a solid political structure for eight years of which Diri was a part and beneficiary of. It was this same structure under the leadership of Dickson that fought the political and legal battles against the opposition which today produced a governor from within the Restoration political System and from Kolokuma/Opokuma LGA, a minority LGA in Bayelsa State which on account of voting strength would never in a hundred years have attained this feat.
This is what practically accounts for the majority of Diri’s cabinet members and other political appointees being made up of people from the Dickson led restoration government which is only natural. Those therefore pushing for a parallel political structure for Diri are mischievous and do not mean well for the governor who is obviously making plans to run for a second term. It is actually a plot remove Diri’s foundation.

This political assertion is also the view of a socio-political pressure group under the aegis of Apostles of Great Governance (AGG) which alleged that the forth coming governorship elections in Bayelsa State will be fiercely contested by the opposition who are confident and have in many fora and ways suggested that the current governor will certainly be defeated if Dickson does not back him as he did in 2019.

The group in a statement signed by its coordinator, Kemeowei Philips and Secretary, Mrs Gladys Okayi further alleged plans by the opposition to take over 60 percent of the next dispensation’s political offices especially the legislature having drawn conclusions based on months of observation of Diri’s administrative style.
“Recently, Diri directed that all ‘first term members’ in the State House of Assembly be allowed to return for second tenure. From our records the first term members in the State House of Assembly are 12 in number and all or most of them were colleagues of Governor Diri who all served together in the restoration government under the leadership of Dickson”.

“Although many are displeased with this decision and have expressed their displeasure in divers ways including decamping to other parties, it is a fact that this is the only way victory is sure for Diri’s second term bid.
However, those advancing the misguided and mischievous ‘this is Douye Diri’s government’ agenda are frantically working to convince Diri to believe that his directive implies that Dickson retains control of 60% of the Legislature which poses a potential danger to the Diri’s Government as it will be at the mercy of Dickson. But truth be told, would someone who staked his entire political future to install an ‘unpopular’ candidate, suddenly change overnight?
Dickson as a politician has never been identified with such brand of politics. It is on record that though his is the first and longest serving governor in Bayelsa, his administration was the most politically stable the state had ever witnessed.

There was no single episode of impeachment in the state all through his reign as governor rather there was political tolerance and acceptance. Having worked that hard to instil a political culture of peace, dialogue and consultations and created a conducive environment for political ambitions to gain expression, what would be the benefit if he makes a u turn?

What is actually required right now is to urge the Prosperity Government of Sen. Douye Diri, to rise up to the occasion and lead, administer and govern in a manner that will first raise the confidence to the people of the State as well disrupt the plot by mischief makers both within and without to destabilize the Prosperity Government as the 2023 General elections approaches.
“A stitch in time, they say saves nine,” Our findings revealed that aggrieved members of the PDP in the state especially those who had intentions to contest elective positions but were ‘harmonized’ out by the powers that be are now considering mass defection from the party to other opposing parties in the weeks and months ahead of the 2023 general elections which by the way is a regular trend nationwide during elections.

Already, one of the victims of harmonization an Executive Assistant to the state governor on NYSC, Mr. Suoyo Appah has resigned his appointment and dumped the PDP for the All Progressives Grand Alliance (APGA) following what he described as lack of internal democracy in his former party.
Appah has since picked up APGA’s interest and nomination form to contest for the Kolokuma/Opokuma Constituency 1 in the State House of Assembly having been skewed out against his political will.

Groups in the state are seriously making efforts to reach the Bayelsa State Commissioner for Information, Orientation and Strategy, Mr. Ayiba to obtain the government’s position on the issues but to no avail.
Diri’s political influence came to the fore last week during the screening of aspirants by the PDP in the state when the member representing Sagbama/Ekeremor Federal Constituency, Fred Agbedi, who had already picked his Bayelsa West Senatorial District was asked by Diri and the Stakeholders of the PDP to jettison the ambition and prepare to return to the lower House and allow the incumbent senator to continue at the Senate.

This move gained the approval of most stakeholders as it reminded them of the style of leadership they were accustomed to.
Groups have alleged that the forth coming governorship elections in Bayelsa State will be fiercely contested by the opposition parties who are confident and have in many fora and ways suggested that the current governor will certainly be defeated if Dickson does not support him as he did in 2019.

Again, Diri has directed that all ‘first term members’ in the State House of Assembly be allowed to return for a second tenure. From our records the first term members in the State House of Assembly are 12 in number and all or most of them were colleagues of Governor Diri who all served in, benefited from the Dickson led restoration government and have collectively contested and won several elections.
Many are displeased with this decision and have expressed their displeasure in divers ways including decamping to other parties, it remains a fact that this is in the only way victory is sure for Diri’s in his second term bid.

Related Topics:Bayelsa's Expectation For these Two.DICKSON AND DIRI
Up Next

2023: TOWARDS PEACEFUL ELECTIONS IN BAYELSA STATE

THE IMPACT OF SOCIAL MEDIA ADDICTION ON MENTAL HEALTH OF USERS!