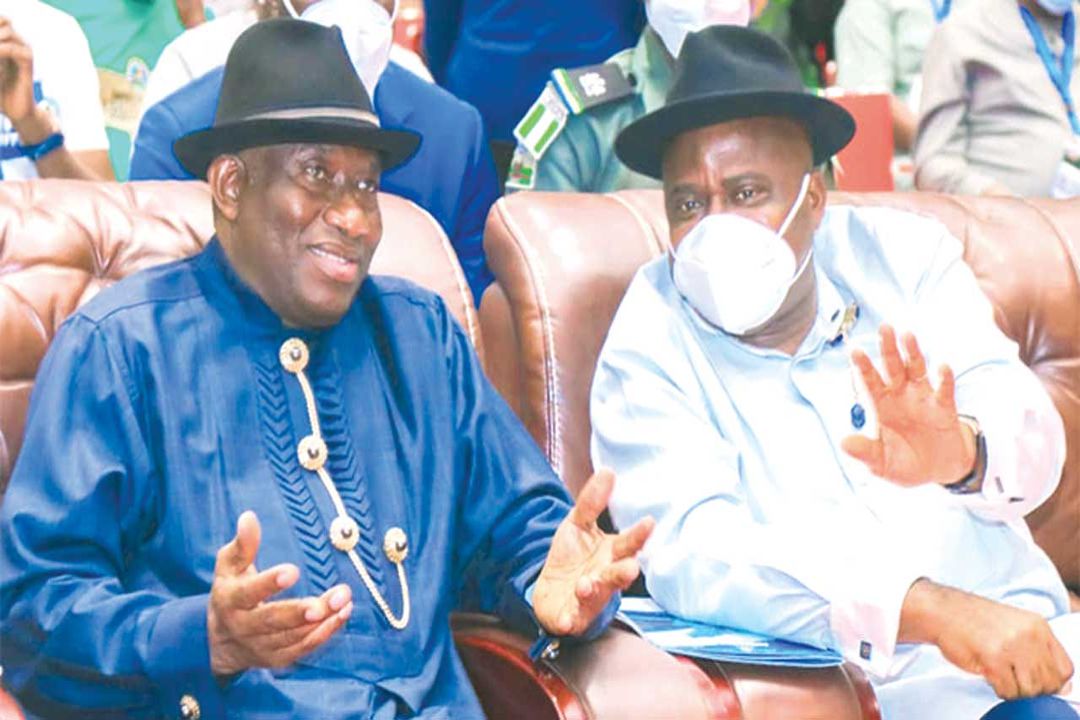 ‘NEBULOUS’ is the right word to describe the controversy in the recent political developments around the former president of Nigeria, His Excellency Dr. Goodluck Ebele Jonathan. The back and forth media reportage and the observed silence of the key actors in all of this makes it truly difficult to differentiate the facts from lies. Certain questions are begging for answers and I believe it is a compound view. My radar however is on Diri.

A few weeks ago, the Chief press secretary of His Excellency, Senator Douye Diri, Mr Daniel Alabrah was quoted to have dropped a political message on facebook bordering on the alleged decamping move by the former president and his opposing personal view on the former president’s proposed bid to preside over the affairs of the country for a term of four year only, if given the ticket. His exact statement reads thus:

‘My personal view is that another Goodluck Jonathan presidency will shortchange the whole southern Nigeria. He can constitutionally run for only one term of four years. After a northerner, Muhammadu Buhari’s eight years, the south would spite its face presenting a president than can only do one term. For me, it is a No-No.
On another front, Jonathan running on the APC ticket is totally unacceptable to me. After being president on the PDP platform for five years, joining the APC solely for the purpose of becoming President gives him away as being overly desperate. It rubbishes the tag on him as being a democrat.
If he is still interested to return to the Aso Villa, why dump the PDP? Accepting to join APC because of the lure of the presidential ticket is like swallowing the poisoned chalice. And I’ll be too happy to see him lose if he contests. It doesn’t matter to me whether he is our respected leader from Bayelsa. My candid personal opinion.’
~ Daniel Alabrah, Chief Press Secretary to Governor Douye Diri

Although Mr. Alabrah’s post attracted comments from all angles, the observed common flaw across board was the fact that as chief press secretary to the governor, his views could be mistaken for that of his boss so a press statement was hurriedly circulated by Hon. Ayibaina Duba, Hon Commissioner for Information, Orientation and Strategy, dissociating the governor and government from the post Alabrah made.
Is this disclaimer not indicative of the fact that Diri would want to be a bridesmaid peradventure GEJ eventually becomes ‘the bride’?

Otherwise, this unusual swiftness in response is particular very suspicious considering the fact that it took the same governor and government forever to respond to the Atala Marginal Oil field (OML 46) issue until Bayelsa lost it.
This governor and government kept mute when Chief Timipre Sylva threw insults at them in a radio program in Bayelsa a few months ago. Just last week, the Rivers state governor brazenly insulted the entire Ijaw nation, what did the Governor General of the Ijaw nation do? Nothing. How long did it take the governor and government to address the recent zoning arrangement issue in Bayelsa west where Diri’s spokeman, Mr. Jeremiah Owoupele even went on radio to air his personal view that heated up the polity in that region yet an almighty press statement was released to address a leaked personal view by an Mr. Alabrah. Quite impressive.

The fact that the message by Mr Alabrah attracted unsolicited attention to the governor and government of Bayelsa, did not mean that what he said was incorrect. His view actually communicated the mind of a majority of persons in Bayelsa and beyond.

The media outrage, discountenancing the former president’s actions a few days ago where he made a statement refuting certain gestures by supposed supporters and then within 48 hours reversed same, tells of the perception of the generality of people about his alleged quest.

Since Diri assumed office, word about his planned defection has been making the rounds and if he is truly nursing any plan to decamp to the APC whether as a bridesmaid, a member of the bride’s family or a guest, it is as good as replacing the name of the former president with his in the statement by Mr. Alabrah. Let it be known that the political hammer that the APC has prepared for him will drop on him wherever he chooses as his tent.

Related Topics:IS DIRI A CHIEF BRIDESMAID?
Up Next

2023: Jonathan, Emefiele Out Of Presidential Race