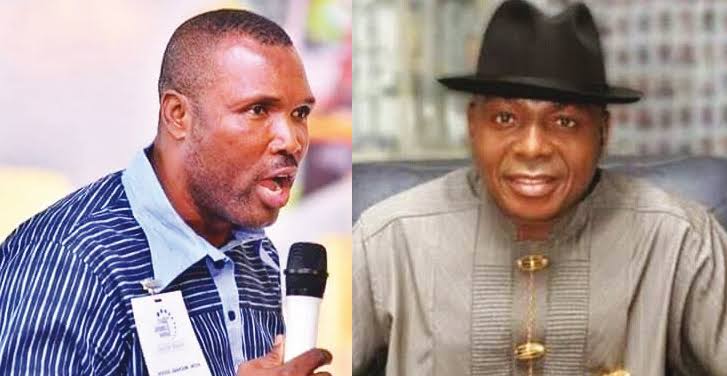 Except something dramatic happens soon, the outcome of the Delta South Senatorial District election in 2023 could be the most keenly monitored in the state. The reasons for this are not far-fetched.

From the onset of the fourth republic on May 29, 1999, the district comprising the eight local government areas of Bomadi, Burutu, Isoko North, Isoko South, Patani, Warri North, Warri South, and Warri South West, has remained under the firm grip of the People’s Democratic Party (PDP), the ruling party in the state, unlike the other two that have come under the control of the ruling party in the state, and its main opposition All Progressives Congress (APC). Delta Central is presently occupied by the Deputy Senate President, Senator Ovie Omo-Agege (APC), who won a re-election in 2019, unlike Peter Nwoboshi, his counterpart in Delta North, originally elected on the platform of the PDP, before cross carpeting to the rival APC.

While the entrance of Omo- Agege into the guber race has thrown the contest for the Delta Central seat open to new aspirants, Nwoboshi, a former chairman of the Delta State PDP, now has to prove his popularity among his Anioma people, if he must return to the upper chamber next year. He must also prove that his new political affiliation, the APC, is indeed, acceptable to his kinsfolks.

Like Omo-Agege, Senator James Manager, who is today one of the three longest-serving Senators today, having entered the upper chamber in 2003, the same time as Senate President Ahmed Lawan and Senator Ike Ekwerenmadu, is currently seeking to fly the PDP flag in the race to the Delta State Government House, seeming brushing aside the zoning of the position to Delta Central. The quest by Manager, of Izon (Ijaw) extraction, popularly called ”Okpaluku,” who replaced Senator Stella Omu, an Isoko, after a single term in office (1999-2003) to seek higher office, may have opened the battle for his replacement by aspirants of other ethnic nationalities- Itsekiri and Isoko.

It is largely believed that Manager’s long stay in the Senate seat was some form of political compensation after the man who was the state’s party chairman (1998-1999), was denied the governorship ticket handed to Dr. Emmanuel Uduaghan, a two-term governor of Delta State in 2007 and 2011.

Agitations to replace Senator Manager started in 2015 when the then Governor Uduaghan attempted to wrestle the PDP ticket met which was met with stiff resistance by the Izon who argued that the Itsekiri cannot replace them having just completed eight years at the Government House in Asaba. With ex-governor Uduaghan not showing any further interest in the Senate seat, aspirants of the two other major tribes in the zone are currently wooing their party delegates across the local government for votes at the different party primaries.
Over the years, there has been agitations as to who represents the zone by the Itsekiri and Isoko, with the later arguing that it be allowed to take another shot, since its representative only enjoyed a single term. The Itsekiri have also argued that it is the only major ethnicity yet to represent the district in the Senate.

So far, the frontline candidates include Michael Diden, otherwise known as Ejele, an Itsekiri extraction, who is eyeing the PDP ticket; and Sir Ayodele Oghogho Othihiwa, an Isoko, just like Dr Sylvester Onoyona, who will be flying the APC flag. Also, there is Hon. Daniel an Itsekiri candidate of the Social Democratic Party

With no Izon aspirant in the race, Manager’s dominant nationality (found in Bomadi, Burutu, and Patani), will largely determine who replaces their son at the red chamber just as the sprinkling of Urhobos, the dominant tribe in Delta Central, but minority in the South, found in the cosmopolitan Warri area that also has a chunk of Izon. With seven local governments and four ethnic nationalities, the district is one to watch in the battle for who represents it.

The Itsekiri are, however, not the only group itching for the slot. Recently, a forum of over 20 Presidents-General of communities within the Isoko nation, in a communiqué signed by their Chairman, Chief Okpe-Logbo, warned their Ijaw and Itsekiri neighbours not to usurp the position through any political trick, “petty sentiment,” or lopsided zoning. The Isokos nation, they argued, has consistently supported the Ijaws and Itsekiris in every senatorial and governorship election without political blackmail, subterfuge, or propaganda, in all of the 19 and eight uninterrupted years respectively.

The forum reiterated “its commitment to the politics of fairness, and unanimously admitted the fact that Isoko has occupied the senatorial seat once, via Stella Omu, from 1999-2003, a term they said is politically insignificant, compared to the elective and appointive political offices held ab initio by the Ijaws and Itsekiris.

“We restate our unanimity as an ethnic nation to respectfully appeal to all stakeholders wherever they find themselves, to consider and reward Isoko’s age-long affinity with the Ijaws/Itsekiris, our political benevolence demonstrated tirelessly over the years, and support given to successive governments, so, not to be tempted or coerced into foisting anybody on us under the guise of free and fair primaries.”

The group also recalled that when Dr. Uduaghan, an Itsekiri man, indicated interest to become governor, one Chief James Obeuwou, an Isoko man, who also procured the form for expression of interest, was prevailed upon step down, following which “Isoko massively, as usual, gave support to Dr. Uduaghan, a juicy and centre office he occupied for eight uninterrupted years, which ultimately is bigger than 50 Senators put together.

“We encourage and appeal to all political, cultural, business and religious leaders in other ethnic groups to key into this one and only pivotal Senatorial Isoko request,” the group stressed, appealing for a rethink or attitudinal change, especially by those called political saboteurs to engender victory at the polls.

The group wants the PDP ticket for the zone for Sir Ayodele Othihiwa, a business mogul who is not new to the district, having once contested and lost the party’s primaries for the Isoko Federal Constituency in 2018. Thereafter, he has gathered the necessary grassroots followership, necessitating the support from his kinsmen.

As if to guarantee its chances, the Isoko also has a candidate contesting the 2023 election has been bolstered after the APC gave its Delta South ticket to Dr Onoyona, who promised to build his representation upon “righting the wrongs of the past,” insisting that the people of the zone deserve much more than they get form the federal government. Isoko land alone, for example, he noted, harbours the largest number of oil wells by a homogenous entity in the world, in addition to what the Itsekiris, the Ijaws and the Urhobos in the district boast of.

He assured the people that “a new dawn surely beckons,” unlike in the past marked by “misrepresentation, non-accountability to constituents, preference for pecuniary gains, dearth of ideas and lack of communication with the grassroots; all of these he noted have culminated in what he described as abysmal performance…”

With Manager out of the race, those close to the power corridors in Delta State, believe the coast is clear for Hon Diden, who was first appointed Commissioner representing his Itsekiri ethnic stock on the board of the Delta State Oil Producing Areas Development Commission (DESOPADEC) during the Uduaghan administration. The man who is currently Chairman of DESOPADEC, having somewhat engineered himself into the political scheme of the Delta PDP in 2019, many insist, is not a political neophyte.

He was said to have played a prominent role in the re-election bid of Governor Ifeanyi Okowa, a situation that gives him a high chance of going to the Senate next year, had contested that year’s PDP primaries against Senator Manager, who won by a tight margin, a situation that may have emboldened him to try once more.

Perhaps encouraged by his first-hand experience in interfacing with host communities, Ejele said in one of his several consultation that he decided to contest for the senate seat to ameliorate the plight of his people in the oil and gas producing areas of Delta South whose major headache has been producing the black gold with very little to show for it.

According to him, “Despite our best efforts to improve the situation with the limited resources at our disposal, my people have not received corresponding dividends from the exploitation of the God-given resources.

“Generally, the plight of the oil and gas producing communities of Delta South is well documented and despite our best efforts to improve the situation with the limited resources at our disposal, my people have not received corresponding dividends from the exploitation of the God-given resources hence my decision to seek election into the Senate,” he stressed.

Some factors that may serve as political capital and determine who eventually clinches the PDP ticket, keen watchers of the party say, are stewardship and loyalty. Both, they believe, Ejele has speaking for him, recalling how in the 2015 and 2019 Delta State gubernatorial elections, he supported Okowa, through his Delta Political Vanguard (DPV) a pressure group he founded. The governor, indeed, recently acknowledged the group’s immense contributions to the realisation of his governorship ambition in 2015 and eventual re-election in 2019.

He recalled, for example, that “Michael Diden’s leadership of DPV no doubt contributed significantly to our success in the 2015 and 2019 elections. He is a man of the people and a truthful politician loved by many for his open-door policies and humane disposition.

“As chairman of DESOPADEC, he has stabilized the commission to focus on its core mandate. DESOPADEC under his leadership has continued to contribute to poverty reduction, economic, social and infrastructure development in the oil-bearing communities of the state, which recently won the commission Independent Newspapers Award for the Outstanding State Agency of the year,” he stressed.

Another Itsekiri aspirant is Hon. Reyneju Daniel, a former member Representing Warri Federal Constituency in the House of Representatives, who left the PDP a year after failing to return to the green chambers in 2018, also recently flagged off his aspiration. This time, he is contesting under the Social Democratic Party (SDP).

In the matter of presidential pendulum