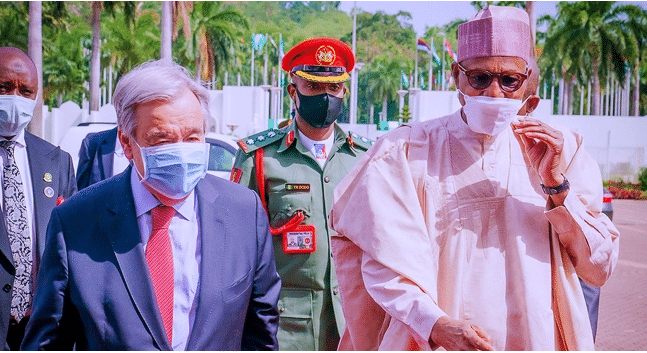 The leader of the Umbrella body of Yoruba Self-Determination Groups, Ilana Omo Oodua, Professor Banji Akintoye, has said Nigeria is a failed state under the Muhammadu Buhari-led administration.

Akintoye made this known in a statement issued by his spokesman on Wednesday, TrackNews reports.

He told the United Nations Secretary-General, Antonio Guterres, that Fulani herdsmen and terrorists have destroyed the Southern and Middle Belt regions.

The Professor added that Buhari has mismanaged Nigeria’s diversity and ethnicity which allowed Fulani terrorists to kill and rape innocent citizens in the South and other regions.

He, however, urged the UN Chief to visit scenes of herdsmen and terrorists attacks and not to listen to President Muhammadu Buhari.

The statement reads: “Your Excellency cannot get the true picture of how close to the precipice Nigeria is unless you visit the theatres of the criminality of this government. Visit the Middle Belt, behold the atrocities of Fulani herdsmen and marvel. Visit the Southwest.

“Visit Ifon, also in Ondo State, whose traditional ruler was murdered by Fulani herdsmen. Visit Southern Kaduna where ethnic cleansing is a daily activity of the murderous Fulani nihilists. The same thing is happening in Taraba, Plateau, Niger, Ogun and Oyo states where Fulani herdsmen maim, rape, kill farmers and destroy farmlands in their land-grabbing drive across the southern region of the country.

“Your Excellency, the list is endless! And the atrocities have not abated. The Buhari administration refuses to allow the victims arm and defend themselves whereas the murderers are allowed to roam about with AK-47 looting, raping, maiming, and killing.”

Akintoye told the UN Scribe of how the secret security service of the Buhari administration invaded the home of Yoruba self-determination activist, Sunday Adeyemo Ighoho.

He added: “You must be aware of how the secret security service of the Buhari administration invaded the home of Yoruba self-determination activist, Sunday Adeyemo Ighoho, killing and maiming innocent and law-abiding citizens and destroying property worth millions of dollars.

“The Nigerian court system has described the invasion as a lawless and vagrant violation of Igboho’s rights. Costs running into billions of Naira were awarded against the Nigerian government.

“But the Buhari government is lawless and cherry-picks which court decisions to obey and which to disregard. In saner climes which I am sure you are familiar with, the law is no respecter of persons and court judgments are binding on all. Not so the Buhari administration!

“Hence, the generally acclaimed estimation of Nigeria today as a failed state. But before the situation gets out of hand, please act quickly!”

Related Topics:Akintoye Tells UN ChiefNigeria Under Buhari Is A Failed State
Up Next