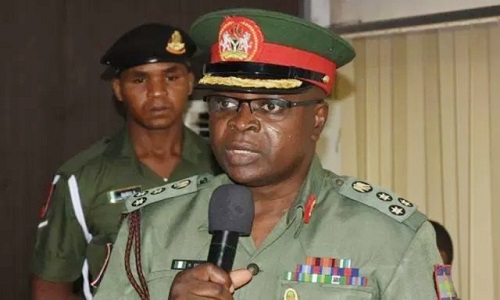 The National Youth Service Corps (NYSC) has promised to sanction any institution caught engaging in fraudulent mobilisation of graduates for national service.

It said it was determined to plug the loopholes and prosecute anyone found complicit in the mobilisation of unqualified graduates for national service.

Director-General Maj.-Gen. Shuaibu Ibrahim stated this during the maiden meeting of NYSC management with registrars of corps producing institutions in Nigeria, held in Abuja.

He said the meeting with the theme: “Appreciating the Role of Registrars as Fulcrum in the Mobilisation Process,” was convened to seek ways of eliminating flaws in the NYSC mobilisation process.

In a statement by the Director of Press and Public Relations at the NYSC, Eddy Megwa, the DG said: “Gaps have already been identified with a number of resolutions reached on how to eradicate recurrent challenges, but implementation has remained elusive.

“In schools where registrars have abdicated their roles to subordinate officers, we have seen various forms of abuses and shortfalls.

“This has given rise to occasional mobilisation of unqualified persons, many of whom have been detected by NYSC field officers.”

The Director, NYSC Corps Mobilisation Department, Victoria Ango, said the mobilisation exercise was a joint function, which must be free from all forms of defects, to guarantee the desired outcome.

Related Topics:NYSC to prosecute institutions involved in fraudulent mobilisation
Up Next

Senate laments as terrorists kill over 40 residents, soldiers in Taraba