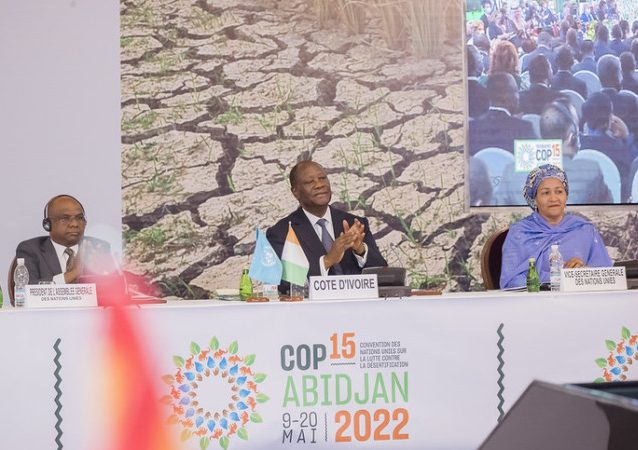 President Alassane Ouattara of Côte d’Ivoire has announced US$2.3 billion in funding for the Abidjan Initiative, a five-year plan to combat land degradation and deforestation in the West African nation.

Ouattara presented the launch of the program during opening remarks at the 15th Conference of the Parties to the Convention to Combat Desertification (COP15), which officially opened this week in Abidjan. The summit is attended by representatives from 197 countries, including President Hage Geingob of Namibia and other heads of state.

“Our summit is being held in a context of climate emergency which is having a severe impact on our land management policies and exacerbating the phenomenon of drought,” said Ouattara during his opening address.

“It also takes place at a time when our economies are weakened by the impacts of COVID-19, and are bearing the brunt of the effects of the drama unfolding in Ukraine, with its share of food price increases and energy.”

Drought and desertification have affected 60% of the land in Côte d’Ivoire, he said, and that reaches 90% in the northern part of the country, along the borders of Mali and Burkina Faso. It’s not just agriculture that is affected.

“These scourges also constitute a threat to our energy and health security, and, in the long term, to peace,” Ouattara said. “Indeed, desertification and drought are sources of migration and inter-community conflicts, due to the competition around the constantly decreasing natural resources.”

The COP15 agenda includes discussions on developing drought resilience and future-proofing land use, as well as pathways to land restoration and the role of African youth in achieving that goal.

Related Topics:Ouattara announces US$2.3 billion land restoration plan for Côte d’Ivoire
Up Next

NATO: Russia could cut gas supply to Finland on Friday