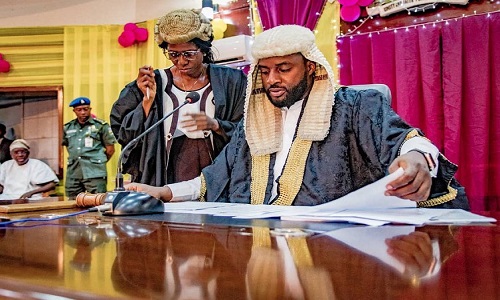 Oyo State House of Assembly, its Speaker and two other principal officers have sued the Economic and Financial Crimes Commission (EFCC) over its investigation of the accounts and financial activities of the third arm of government in the state.

The plaintiffs are contending among others, that no provision of the Constitution empowers the EFCC to probe the Oyo State Assembly and its principal officers without a formal complaint from the state’s Auditor-General.

They said the EFCC, being an agency of the Federal Government, “cannot look into and/or cause to investigate the accounts of any authority such as the 1st plaintiff (Oyo Assembly) and/agency in Oyo State,” in view of the specific provisions in sections 120,121, 125, 126 and 127 of the Constitution.

Listed with the House of Assembly as the plaintiffs in the suit are Adebo Edward Ogundoyin (the Speaker); Sanjo Adedoyin Onaolapo (Majority Leader) and Asimiyu Niran Alarape (Minority Leader). The EFCC is the sole defendant.

The pendency of the suit, filed on May 5 this year at the Federal High Court, Ibadan has been communicated to the Chairman, EFCC Abdulrasheed Bawa and the Director, Legal Department via letters written by lawyer to the plaintiffs, Musibau Adetunbi (SAN).

The letters, with the court processes attached, were sighted by The Nation in Abuja yesterday. They are dated May 5, but received at the Abuja headquarters of the EFCC on May 6, 2022.

The letters are titled: “Notification of the pendency of suit No: FHC/IB/CS/71/2022 between Oyo State House of Assembly & 3 others v. Economic and Financial Crimes Commission.”

The plaintiffs are praying the court to among others declare that under the Constitution, particularly Section 125, the state’s Auditor-General possesses the exclusive duty to investigate the accounts and finances of the House of Assembly and its officers.

Related Topics:Oyo Assembly queries EFCC’s power to probe its finances
Up Next