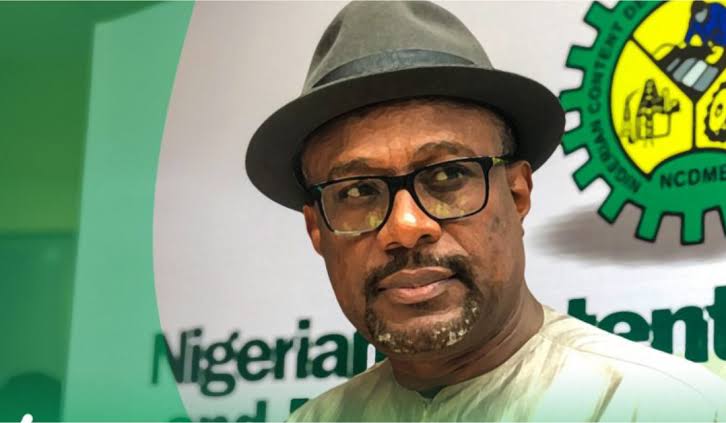 …Alleged he is corrupt and unfit for the office

Members of the Concerned SPDC EA Host Communities Forum in Bayelsa state, have called on the President of the Federal Republic of Nigeria, Muhammadu Buhari, to sack Engr. Simbi Kesiye Wabote, the Executive Secretary of Nigerian Content Development and Monitoring Board (NCDMB) for alleged abuse of office and breach of public trust.

The group alleged that he has been shielding contracts from SPDC E.A Field OML 79 host communities in Ekeremor Local Government Area of the state, an action, they said, has led to crises in Bayelsa State and also posit he has always acted without compliance with the provisions of the NOGID Act 2010.

The letter reads in part “We the undersigned for ourselves and on behalf of the host communities of SPDC E.A Field OML 79 in Ekeremor Local Government Area of Bayelsa State, are constrained to humbly call on you to sack Engineer Simbi Kesiye Wabote, the Executive Secretary, Nigerian Content Development and Monitoring Board (NCDMB).

“This letter is to humbly request you to invoke your powers as contained in Section 81 of the Nigerian Oil and Gas Industry Development (NOGID) Act, 2010 with which you appointed Engr. Simbi Kesiye Wabote and that same power empowers you to sack Engr. Simbi Kesiye Wabote as the Executive Secretary of the Nigeria Content Development and Monitoring Board as a person not fit and proper to hold the said office.

“Our complaint is that Engr. Simbi Kesiye Wabote is so corrupt that he finds it very difficult and has never implemented the provisions of Sections 65, 66, 67 and 68 of NOGID Act 2010.

“Engr. Simbi Kesiye Wabote is a former staff of the Shell Petroleum Development Company of Nigeria Limited (SPDC) and thus he has been corruptly shielding SPDC’s violations of the provisions of the NOGID Act 2010.

“Engr. Simbi Kesiye Wabote and his cabal in SPDC through the SPDC GMoUs in particularly in Ekeremor Local Government Area of Bayelsa State has blatantly violated the provisions of Sections 65, 66,67 and 68 of NOGID Act 2010 for the purpose of shielding contracts which they subsequently award to themselves and cronies.

“Governor Douye Diri of Bayelsa state through his chief press secretary, Mr. Daniel Alabrah, on 26/3/2021, announced the suspension of GMoU in Bayelsa State and stated that ‘the suspension is on the heels of an allegation by the Bayelsa State Government that SPDC has being fueling crisis and insecurity in its Host Communities in the Niger Delta.’

“Engr. Simbi Kesiye Wabote has consistently and deliberately flouted the very clear and unambiguous provisions of Sections 17, 18, 19, 70, 21, 72 and 23 of the Niigerian OiI and Gas lndustry and Content Development Act, 2010, to shortchange our Communities from benefiting from contracts, employment, and other benefits that ought to naturally inure from the SPDC EA Field OML 79 in Ekeremor Local Government Area of Bayelsa State to our communities.

“For instance, since 2019 up until the time of writing this complaint against Engr. Simbi Kesiye Wabote, the SPDC Nigeria Limited had embarked on several projects at the SPDC EA Field. There had been SPDC SEA Eagle Symp Leg Repairs for three consecutive times i.e. 2018, 2019 and 2021. Drilling for OML 79 Further OiI Development Projects 2018, 2019 to 2021 without any compliance whatsoever with the provision of the NOGID Act 2010.

In continuation, they said, “These corrupt actions of ENGR. Simbi Kesiye Wabote prompted one of our sons, Mr. Goodnews Gereghewei to institute a court case against the Executive Secretary and the NCDMB Board in the Federal High Court of Yenagoa Division with suit Number FHC/YNG/CS/50/2020, where the court gave judgment against Engr. Simbi Kesiye Wabote, Executive Secretary of NCDMB to provide documents and details of the SPDC EA OML 79 further Oil Development Project Operations and the three (3) times repairs of the SPDC EA SEA-EAGLE SYMP LEGS i.e 2018, 2019 & 2021 for the Plaintiffs. The order of court was served on him but he refused to obey the order simply because due process was not followed in the Awards of contracts regarding the FOD project & the SPDC Symp Leg Repairs.

“In addition, contempt of court (Form 48) (disobedience) to order of court was to be served on him dated 24th Feb, 2O21 but he evaded service twice, and ran to court of Appeal in Port Harcourt and filed an Appeal with Appeal Suit Number CA/PH/PH/115/2021 with the sole aim to delay justice.

“We must fight for our right! We are therefore calling on Mr. President Buhari to sack Engr, Simbi Kesiye Wabote without delay and appoint someone with good reputation and has the fear of God as an Acting Executive Secretary of the NCDMB to complete the left over Tenure of Engr. Simbi Wabote Kesiye,” they concluded.

I Finally Defeated EFCC In Court, My Cars And Properties Have Been Released- Bitcoin Lord