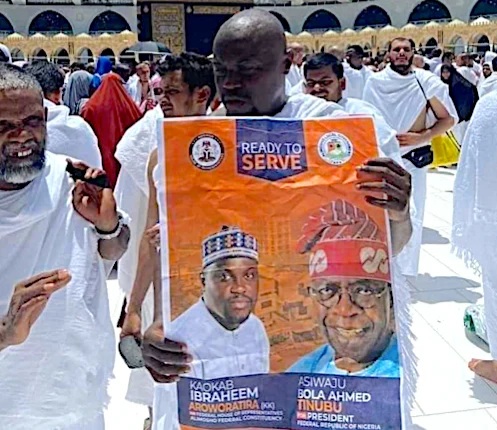 Thirty Nigerians have been arrested in Saudi Arabia for displaying Bola Ahmed Tinubu campaign posters at the sacred mosque of Kaaba.

The Nigerians were reportedly apprehended by Saudi authorities at the holy mosque while doing the lesser Hajj, Umrah, while walking around the Kaaba with Tinubu’s posters raised.

The incident occurred during Ramadan, just prior to the Eid-El-Fitr (Sallah) holiday.

An eyewitness, Murtala Adamu Jega, a Nigerian who also performed the lesser Hajj at the time said, “I’m a witness; I saw them lift Bola Tinubu’s posters at the holy Kaaba.

“This is despicable. Instead of them to devout precious time to pray for peace to return to our country, 30 men made a mockery of our nation by lifting up a politician’s posters in the holy place. Thank God, Saudi authorities were swift to have arrested them right there and then,” he said.

For Zainab Abdullahi, another Nigerian who was at the mosque, “the scenario was a very bad representation of Nigeria’s image before the world, and I think politicians must desist from this bad behaviour”.

Meanwhile, a Saudi Arabian source said those arrested would be charged to court to serve their sentences.

Commenting on the situation, a renowned Islamic Cleric in Nigeria, Sheik Nura Khalid, commended the Saudi authorities for the arrest, saying, “Lifting up a politician’s posters in the holy Kaaba has contravened Islamic traditions.”

2023: Sack Emefiele If He Fails To Resign – Akeredolu Tells Buhari

2023: Our Economy Is In Shambles, Nigerians Fault Emefiele’s Declaration