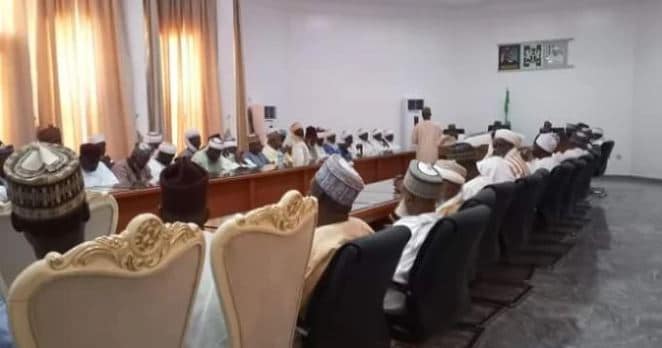 The Governor of Sokoto State and Presidential aspirant, Aminu Tambuwal on Friday met with Muslim leaders in the state following the murder of a female student at the Shehu Shagari College of Education, Deborah Samuel.

The 200-level student was attacked and killed for alleged blasphemy against Prophet Muhammad (SAW).

The development has stirred reactions across all board, as Nigerians condemned the killing of Deborah.

The Governor of Sokoto State in his reaction to the development called for a meeting of the state’s Islamic leaders in the government house.

The aim of the meeting is to discuss how to ensure the murder of the student does not elicit violent reprisals.

Tambuwal who is hoping to clinch the presidential ticket of the Peoples Democratic Party cancelled his consultation visits to Bayelsa, Delta and Edo states due to the incident.

The spokesman of the Sokoto police command while speaking on the incident said, “At about 0900hrs, a distress call was received from Shehu Shagari College of Education, Sokoto, stating that students were rioting over one female student named Deborah Samuel, a level two student, who was accused of making a social media post that blasphemed the holy prophet Muhammad (SAW).

“Students forcefully removed the victim from the security room where she was hidden by the school authorities, killed her and burnt the building.

“The students banded together with miscreants and barricaded the Sokoto/Jega road.

“Upon receiving the information, the DC Operations led a team of policemen and all other operational commanders in the state to the school where the road was cleared and the situation was brought under control.”

Meanwhile, the school has been closed down pending the investigation of the incident.

Mother of four arrested with human skull in Edo

I killed three persons to get promotion, says cult member