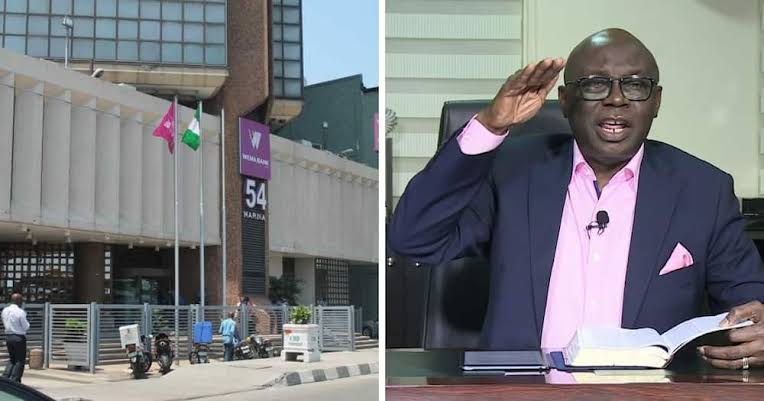 There is an alleged skirmish brewing between Lagos Pastor, Tunde Bakare and WEMA Bank over an alleged N9 billion loan

The alleged loan was used to finance the building of the Citadel Global Community Church in Lagos
Unconfirmed reports say the bank is making a frantic effort to recover the loan which was initially N4.5 billion and accumulated to N9 billion
It is not yet clear if the news making the rounds in many quarters is anything to go by about the alleged N9 billion loan given by WEMA bank to Citadel Global Community Church owned by Pastor Tunde Bakare in Oregun, Lagos.

According to multiple accounts, WEMA Bank is allegedly making frantic efforts to recover the loan given to the fiery clergyman to use to build the 5,000 seater auditorium, annexes, atrium, library, food court, amongst other things.

The alleged N4.5 billion loan
TrackNews cannot independently verify the news but sources say the bank has initiated moves to get the loan repaid after the exit of its former Managing Director, Segun Olekutoyi who is said to be a close friend of Tunde Bakare.

The initial N4.5 billion allegedly had an accumulated interest amounting to N9 billion which has made it hard for the church to repay.

COVID-19 pandemic to blame?
Unconfirmed sources noted the COVID-19 affected the repayment of the loan by the church after Nigerians were forced into a lockdown that lasted several weeks and restricted large gatherings.

Response needed
As of the time of filing this report, WEMA Bank is yet to respond to an email by TrackNews seeking clarification on the matter.

The bank generated an auto-response to Legit.ng’s query.

“We would like to acknowledge receipt of your query and inform you that a ticket has been created with tracking number 911855. Be assured that your query is currently receiving the necessary attention. A personal response will be provided by our support representative within 24 hours and your query should be resolved within 72 hours. Should there be a need for an extension of time in resolving this query, we would inform you accordingly and provide regular feedback until a resolution is achieved.”

Tracknews reports that Mr Bakare who made this disclosure on Saturday, December 18, during a live programme, noted that although they share different doctrines and beliefs, they are not enemies.

When asked whether the incident was before Mr Oyedepo acquired his private jet, Mr Bakare said he doesn’t know why the clergyman makes so much noise about his private jet.